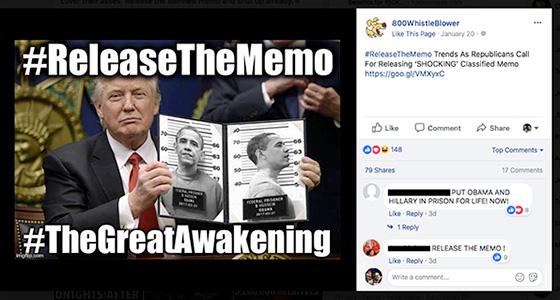 Two Democratic lawmakers are pressing Facebook and Twitter to further investigate reports that Russian-backed accounts spread the conservative meme #ReleaseTheMemo as part of an effort to undermine Special Counsel Robert Mueller's investigation of the Trump campaign.

"We remain gravely concerned about any foreign attempts to undermine or discredit the ongoing inquiries by Congressional committees and Special Counsel Mueller into Russian active measures during the 2016 U.S elections," Senator Dianne Feinstein (D-California) and Rep. Adam Schiff (D-California) said Wednesday in a new letter to Facebook CEO Mark Zuckerberg and Twitter CEO Jack Dorsey. "As the 2018 election season begins in earnest, we cannot allow Russia or any other outside power to manipulate U.S. public opinion or degrade Americans’ trust in the authenticity of domestic political and policy debates."

Feinstein and Schiff are asking Facebook and Twitter to immediately notify people who may have viewed Russian propaganda, and also to de-activate accounts that violated company policies.

The lawmakers' new letter, sent Wednesday, stems from reports that Kremlin-connected accounts promoted the hashtag #ReleaseTheMemo as part of an attempt to pressure Congress to publicly release a Republican-authored memo. The four-page memo reportedly discusses surveillance "abuse" by officials investigating President Donald Trump during the 2016 election campaign. Feinstein and Schiff have called the memo "misleading," and say it "distorts highly classified information."

The FBI separately said Wednesday that it has "grave concerns about material omissions of fact that fundamentally impact the memo’s accuracy."

The move marks the second time in two weeks that Feinstein and Schiff have raised concerns with Twitter and Facebook about Russia's role in spreading #ReleaseTheMemo. The lawmakers said Wednesday that the companies' initial responses "have raised more questions than they have answered."

Twitter said last week in an initial response that its preliminary analysis did not "identify any significant activity connected to Russia with respect to Tweets posting original content to this hashtag."

But the company also said it is still examining the data, and will inform Congress if "additional analysis determines that coordinated manipulation or malicious automation from Russian sources played any significant role in Tweeting original content with the hashtag."

Facebook's response highlighted that the Russian-backed accounts reportedly used Twitter, as opposed to Facebook. "We constantly monitor for those who engage in state-sponsored information operations on our platform, and we welcome information about incidents that may have occurred on other platforms -- in this case, on Twitter -- because it can help us to anticipate and understand new and evolving threats."

Feinstein and Schiff found those responses too narrow, noting that the answers didn't address whether Kremlin-backed accounts helped magnify the meme. "By failing to address whether Russian-tied online accounts on Twitter or Facebook were -- or still are -- amplifying the #ReleaseTheMemo campaign and related messaging, we are no closer to understanding Russia’s continuing interference in our democratic affairs," the lawmakers wrote.

The lawmakers are now asking both companies to provide detailed information about their efforts to investigate what role Russian accounts may have played in spreading the ReleaseTheMemo meme.

Earlier this month, the Alliance for Securing Democracy at the German Marshall Fund, which tracks Russian influence on social media, reported that "ReleaseTheMemo" was the top-trending Twitter hashtag promoted by Russia-linked accounts. But many conservative Twitter accounts also used the hashtag ReleaseTheMemo, which may have helped it to spread.