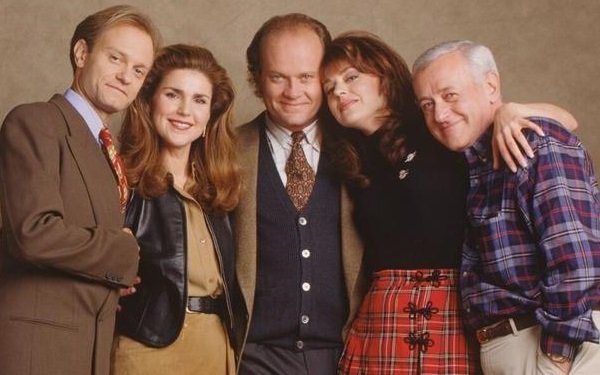 What are the greatest casts ever assembled for TV?

It is an interesting question, and one that is not asked that often. Instead, people seem to ask more general questions related to TV history such as: What was the best comedy, for example? Or the best drama? Or the best cop show? Funniest woman? Funniest man? Best actor? Etc.

We have certainly been blessed over the years with many great casts.  “Frasier” is one of the shows that immediately comes to mind when this subject comes up -- and no more so this week than after hearing the news that John Mahoney had died. He was 77 and died in Chicago.

He was a veteran actor with long ties to the Chicago theater community (although he was born in England in 1940).

Mahoney was a big reason why a discussion of the great casts of TV history must include “Frasier.” The ensemble on that show was pure magic. Mahoney played Martin Crane, a retired Seattle cop wounded in the line of duty who was the father of brothers Frasier (Kelsey Grammer) and Niles (David Hyde Pierce) who were nothing like him.

These three all by themselves would have been enough to qualify “Frasier” for the TV casting Hall of Fame, but they were aided and abetted by co-stars Peri Gilpin (Roz) and Jane Leeves (Daphne), and recurring cast members such as Dan Butler (Bulldog), Tom McGowan (Kenny), Patrick Kerr (Noel Shempsky) and many others too numerous to include here.

Watching the three Cranes do scenes together was as joyful an experience as television has ever offered (and still is, thanks to rerun syndication -- four back-to-back episodes every weeknight on Cozi TV).

One of the marvels of Mahoney in particular was the way he maintained Martin's limp. The character limped and walked with a cane as the result of his bullet wound.

Mahoney had no such limp in real life, but the character's injury and the physical limitations it caused were a necessary part of the “Frasier” scenario since it explained the presence in the Frasier Crane household of Daphne Moon, a physical therapist and home health aide. It also helped explain why Martin was living with Frasier in the first place.

The cane and limp added an extra dimension to the Martin Crane character, providing him with extra bits of business.

Great actors of John Mahoney's caliber embrace these kinds of quirks. They help them in their acting, and in turn, help bring their characters to life.

Martin Crane was nothing if not relatable to many people who watched “Frasier” -- probably much more so than his sons, who were highly comedic, and at times, almost cartoon-like (which helps explain why Kelsey Grammer and David Hyde Pierce were invited to provide their voices for two “Simpsons” cartoon characters, Sideshow Bob and his brother Cecil, respectively)

As mentioned here in previous TV Blogs, the era of “Frasier” (1993-2004) coincided with a handful of other TV sitcoms whose casts were also among the best in TV history: “Seinfeld,” “Everybody Loves Raymond” and “The King of Queens,” to name just three of them.

“Frasier” occupied a place all its own, however, thanks to the performances of the show's stellar cast, but also to the writers who dreamed up the show's farcical, madcap storylines. The “Frasier” scripts were often so intelligent that you can be excused for wondering how such a sophisticated show nevertheless garnered such a wide audience.

Among the show's great quirks was Kelsey Grammer singing “Tossed Salad and Scrambled Eggs” at the end of every episode (or at least most of them). At the end of many of them, he could be heard saying, “Frasier has left the building! Good night, everybody!”

Well, now it is Martin who has left the building. Good night.