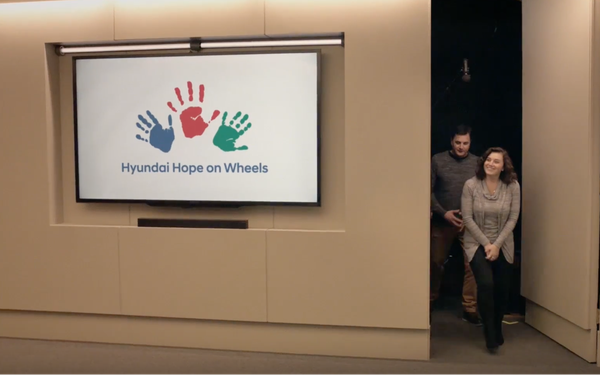 The automaker and its agency, Innocean USA, originally intended to use footage captured early on game day in its Super Bowl ad, running just before the two-minute warning. As the commercial was being created this week, the decision was made to forgo game day content as the storytelling was complete without it. Hyundai CMO Dean Evans and Innocean Chief Creative Officer Eric Springer took reporters through the original plans last week in embargoed briefings.

The commercial opens with fans streaming into the Super Bowl Experience driven by Genesis where they enter what appears to be a typical security checkpoint with metal detectors. As part of their process, they place their keys in a bin. As they pass through the device, a red heart suddenly lights up above the heads of Hyundai owners and they are pulled aside for what seems to be a secondary screening.

They enter a darkened room that suddenly lights up with an emotional video of pediatric cancer survivors and their families thanking them for their donation to pediatric cancer research by being a Hyundai owner.

“They get congratulated for nothing more than buying a great car,” Springer says.

The devices outside the room actually were “hope detectors,” detecting the hope that Hyundai owners provided through donations to pediatric cancer research with the purchase of every Hyundai vehicle over the past 20 years. More than $130 million was raised last year alone through its non-profit organization, Hyundai Hope On Wheels.

In an emotional surprise, real-life pediatric cancer survivors emerge from behind a false wall to surprise and thank Hyundai owners in person for their contributions. The emotional union happens as the two families are in tears and hug as they greet each other. The commercial ends with: “Thanks to millions of our owners, hope is our greatest feature. And it comes standard on every Hyundai.” The last frame is the Hyundai logo and #HopeComesStandard.

“The litmus test is, do owners call me and say they are proud to own a Hyundai?” Evans said during the briefing earlier this week. “We want people to not just consider Hyundai, but to prefer Hyundai.”

Last year, Innocean created Hyundai’s 2017 Super Bowl spot “Operation Better” on the fly using footage shot during the game at both Houston’s NRG Stadium and a military base in Zagan, Poland, then aired immediately after the Super Bowl concluded. Hyundai virtually transported several U.S. troops from a base overseas to the heart of the action inside the stadium, allowing the soldiers to feel as though they were there. The 90-second documentary ran in the first commercial break after the game ended.

The automaker also ran a pre-game spot this year in which an unlikely hero saves the day for a few parents hoping to get home to watch the Super Bowl. The spot, for Hyundai’s all-new Kona, is the brand’s first national advertisement for the new subcompact SUV.