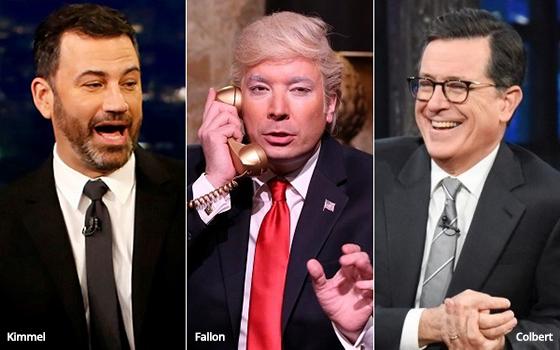 An op-ed column in Wednesday’s Wall Street Journal suggested that our late-night hosts are shooting themselves in the foot by bashing President Trump every night.

The writer, Joseph Epstein, believes the late-night shows' emphasis on anti-Trump comedy does two things to undermine the shows and their hosts.

One is that the anti-Trump material alienates a chunk of America -- roughly half of it -- who support Trump, thereby limiting any potential for the shows to grow their audiences beyond the anti-Trump viewers they already reach.

The second thing is that the hosts (along with the writers and producers behind the scenes) demonstrate and reveal their own personal biases and leanings -- which is something that goes against various unwritten traditions in the comedy game.

At present, there is no late-night entertainment show whose host appears to be politically agnostic -- that is, willing to poke fun at everyone regardless of party or political leaning.

In the recent history of late-night TV, Jay Leno was the most adept at keeping his own political leanings private.

In interviews, he always deflected questions about it too, preferring to give an answer in which he explained that for him, revealing his own personal political points of view went against what he saw as his mission to just be an entertainer for everyone (or as many people as possible).

There is another consequence too, Epstein wrote, that is harder to put into words -- although he did a fine job of it.

After conceding that aspects of Trump's presidency and his personality are irresistible to take up as comedy fodder for the late-night hosts, Epstein wrote: “To have taken what I think of as the Trumpian option in their comedy has rendered these comedians charmless.”

It is a thought-provoking concept -- that the snarky, sarcastic tones the late-night hosts take when it comes to lampooning Trump and his cohorts make these hosts not only “charmless,” but by extension, unlikable, even unlovable.

Their hard-core fans will never agree with that notion, but for middle-of-the-road late-night viewers, the tone can be hard to take night after night -- which is why many long-time late-night viewers weaned themselves off of the habit when the younger generation took over from Leno and Letterman.

In my own career, for example, I criticized Jon Stewart on several occasions for producing comedy on “The Daily Show” that was, in my view, little more than straight-up sarcasm. His fans hated reading that and they would fill my email inbox with all sorts of choice criticism of me.

But Epstein took up the same subject in his WSJ piece, although his subject was Bill Maher, not Jon Stewart. “If you don't share Mr. Maher's politics,” Epstein wrote, “you are likely to find him an odious, even a loathsome character, for he doesn't really exist outside politics.

“His standard tone is mockery, his modus operandi [is] to lacerate his targets with obscenities, flash a nervous smile, and then bask in applause from his audience.”

If not for Trump, Epstein wrote, today's “liberal comedians … Bill Maher and Stephen Colbert, Jimmy Kimmel and Seth Meyers would be practically out of business.”