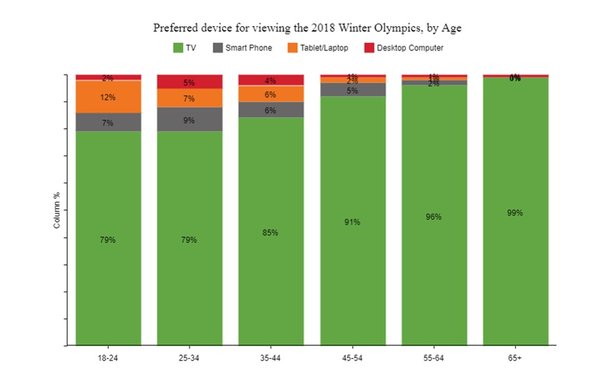 Between the Russian doping scandal and the participation of North and South Korean competitors, there’s been no shortage of provocative headlines in the lead-up to the 2018 Winter Olympics in Pyeonchang. This could help to explain why U.S. adults surveyed this week expressed more excitement about this year’s Olympic events compared to the 2014 Winter Games.

The overwhelming majority (88%) of viewing by the survey respondents will be done on television screens, with just 5% indicating they will rely mostly on a smartphone to consume the coverage. The remainder will use a tablet/laptop or desktop computer. The Olympic Games will be broadcast on various NBC networks, including NBC, NBCSN and USA Network.

While TV is the most popular device for the general population, 12% of viewers who are ages 18-24 said they would rely on tablets and laptops to see their favorite Olympic events.

Overall, 74% of respondents plan to watch at least some Olympics coverage, despite the 14-hour time difference between South Korea and Eastern Standard Time in the United States. Females are only slightly more likely to tune in than males, with 75% planning to watch compared to 73%.

Across all genders and age groups, it appears viewers are more excited for the 2018 Winter Olympics than they were in 2014. Nearly one-third (28%) of respondents say they are more excited for the 2018 games, with only 7% saying their excitement has decreased since 2014. Specifically, females 18-24 (28%) and males 35-44 (27%) have had the biggest jump in excitement since the 2014 Winter Olympics.

Among females, 37% said they are likely to visit a social media page associated with the Winter Olympics, followed by 32% of males. Asked what aspects of the Olympics interest them most, 22% said they love the Olympics overall and could not pick just one element. This was followed by the spirit of competition (18%), national pride (17%) and the highlights (7%).