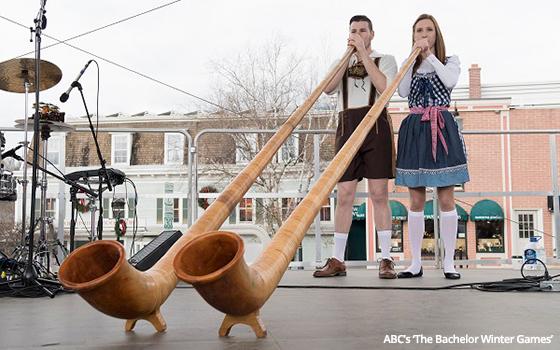 For proof that NBC's competitors have no idea what to do with themselves when faced with the Olympics on NBC for two solid weeks, I give you Exhibit A: This new ABC show called “The Bachelor Winter Games.”

Only a network that has basically given up could come up with something like this. This show -- ostensibly a spinoff of “The Bachelor” -- will run for four episodes beginning Tuesday (February 13) at 8 p.m. Eastern on ABC.

Each episode will be two hours long (taking up two-thirds of prime time on each of the four nights the show will air). The “finale” is scheduled for Thursday, February 22, a few days before the Olympics conclude on NBC on February 25.

I could attempt to describe this show here, but I will let a portion of ABC's press release do the talking for me.

“Is love the universal language?” the ABC press release inquires. “Find out as 14 international bachelors and bachelorettes from such countries as Switzerland, Japan and Australia compete and, hopefully, find love with 12 of America's Bachelor Nation favorites. These singles will go head-to-head in winter-themed challenges, including the toughest sport of all -- love.” Aww.

And it goes on: “Chris Harrison hosts this highly anticipated (What? Really?!), four-episode series, complete with the usual dose of tears, drama, romance and laughter.” Laughter I can understand. But tears? Only if you're crying over the death of television as we know it.

The press release explains that “The Bachelor,” which has now been around for about 20 years, has been licensed to broadcasters in numerous locations around the world where versions in different languages, and featuring a wide-ranging group of bachelors and bachelorettes who are unknown to U.S. audiences, have been airing for years.

This is the rationale for creating this “global celebration of unity and love,” says ABC's press release.

For this “Bachelor” Olympics, which ABC has apparently produced as a counter-programming alternative to the real Winter Olympics on NBC, 26 singles from around the world converged in Wilmington, Vermont for a parade, a musical performance and some sort of international “Bachelor” competition.

As if this concept were not cheesy enough, the series premiere features a parade and celebration that will be presided over by Trista and Ryan Sutter, a couple whose romance began on “The Bachelorette” back in 2002. ABC's press release refers to them as “Bachelor royalty” -- perhaps the first time that these two words have ever appeared consecutively in a sentence anywhere.

This show will even feature appearances from three former U.S. skating stars from past Olympics -- Tai Babilonia and pairs partner Randy Gardner, and Nancy Kerrigan. The network's press release makes no mention of Tonya Harding putting in an appearance, which represents a lost opportunity.

For the duration of the Winter Olympics on NBC -- stretching from last Thursday (February 8) to to Sunday, February 25 -- the rest of television is taking a breather, relatively speaking.

It is not as if all the other networks will go dark and put on test patterns for two weeks. But it is also true that almost no network will dare introduce any new shows during the run of the Olympics, which always dominate TV whenever they are on.

One of the few exceptions, in an online list of new-show schedules that I use from time to time, is a new series on Netflix called “Everything Sucks.” I don't know what this show is, but its title alone provides yet another reason to feel pessimistic about where television is headed these days.

Speaking of which, at least you can say of “The Bachelor Winter Games” that its title is not pessimistic and nobody is expected to get hurt -- except for broken hearts.