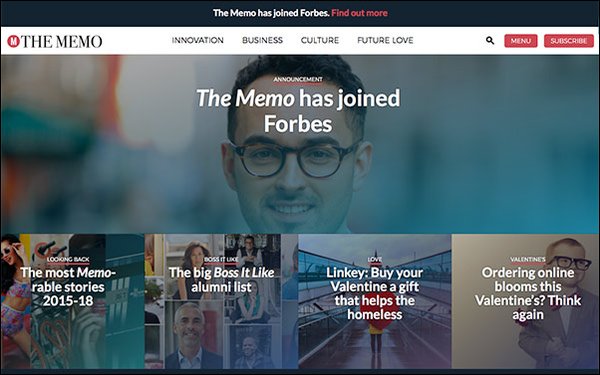 The Memo will be Forbes Media’s first full-fledged editorial team to focus on European content.

“This is a strategic acquisition and part of a multiplatform initiative to grow and better serve our European readers and marketers alike," stated Forbes CEO Mike Federle.

The publisher has further plans to expand coverage and its contributor network across the continent.

The Memo was founded in 2015 and is based in London.

In an announcement posted to The Memo’s site, editor-in-chief Alex Wood said the new Forbes ownership will bring an end to its daily and weekly newsletters. In its place, The Memo will produce a European-focused newsletter for Forbes, which will launch “very soon.”

Forbes’ London office will move to a bigger space in March.

A majority of The Memo’s articles will be moved to Forbes.com and live on the Europe homepage and sections. Starting March 1, The Memo's site will redirect to Forbes.com.

The Memo reaches over 630,000 unique visitors per month.