In Dead Of Winter, Westminster Dog Show Is TV At Its Best 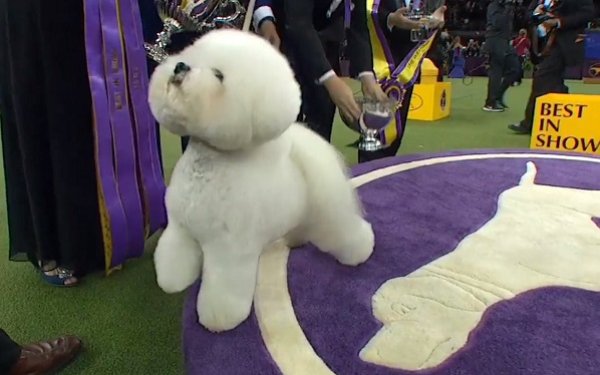 ’Tis the season of fake holidays.

Groundhog Day, Valentine’s Day, President’s Day -- these aren't real holidays. They seem more like they were made up to enliven the dead of winter, otherwise known as February.

One other February tradition that is not a holiday, but possibly should be, is the annual rite known as the Westminster Kennel Club Dog Show -- the Olympics, Oscars and Super Bowl of dogdom.

For two nights in mid-February, sometimes coinciding with Valentine's Day (but not this year), the annual live, prime-time telecast of the Westminster Dog Show from Madison Square Garden holds us in its thrall.

It was no different this year as the annual parade of pedigreed pooches proceeded for well over three hours each evening Monday and Tuesday on the cable channel known as Fox Sports 1.

The three-plus-hour running time was a blessing and a curse. For FS1, it evidently meant greater opportunities for more commercials, particularly on Night Two (Tuesday) in the time between the judging of the final category -- terriers -- and the Best in Show competition.

Like the final segments of the Academy Awards, few who have already stayed up this late for three hours would likely be turning off the TV set before the Best in Show dog is declared. For that reason, this commercial time was likely the most valuable of the entire two days.

If memory serves, in past years, the Best in Show winner was usually announced at or before 11 p.m. Eastern. This enabled 11 o'clock newscasts on local TV stations to get the story on the air some time during their half-hour running time. And viewers could go to sleep too.

This was not the case this past Tuesday as the Best in Show judging stretched well past 11:30. You could see why -- the finalists for Best in Show were an eye-catching group.

A male Bichon Frise, a canine puffball named Flynn, was the winner (pictured above). But stiff competition came from a giant schnauzer, a pug, a borzoi, a border collie, a Sussex spaniel and a Norfolk terrier.

This year's Westminster Dog Show -- the 142nd -- represented the second year for Fox Sports’ coverage of the event. USA Network held the rights to the show for 32 years and telecast it every year until 2017, when Fox took it over.

Fox Sports did a fine job on a sport that is not commonly covered by television network sports divisions. At times, if one wants to be fussy about it, you could detect some isolated moments of uncertainty about the choices of camera shots and angles, although nothing of great importance seems to have been missed.

Suffice it to say that covering a dog show is not like covering a football game, which networks are far more accustomed to covering, and as a result, rarely make a misstep.

Where Westminster is concerned, however, there is a built-in charm and folksiness to this coverage and the window it provides onto the world of dog people that makes this telecast virtually critic-proof.

As usual, the wealth of information imparted by the telecast's announcers and commentators -- primarily the triumvirate of Chris Meyers, Gail Miller Bisher and Jason Hoke -- was one of the best features of this year's show.

Betcha didn’t know: Great Danes were originally developed and bred in Germany. And despite their name, they have no association whatsoever with Denmark. I never knew this before, but now I do, thanks to Tuesday's telecast.

But wait, there's more: Doberman pinschers were first bred in the 1890s by a German tax collector named Dobermann who also managed a dog pound. According to the experts on the Westminster telecast, he needed a dog that would protect him when he made his collection rounds.

And so it went. The dog trivia was never-ending and endlessly fascinating as the Olympics of dogs competed against the real Olympics in Korea.