Influencers are everywhere. We see them in our feeds, on TV and in the media. In the last few weeks alone, The New York Times has published several feature articles on the phenomenon of social media influencers. What was once just a topic for trade publications has taken center stage in the mainstream media.

So, it would seem that influencers are red hot with lots of wind at their backs, right? You might also think that the social platforms on which these influencers have worked hard to build strong following, content and engagement would be looking to create favorable environments for influencers, right? Well, maybe not as much as you would think.

At the same time that publications like the Times have increased their coverage of the influencer economy, and brands have made influencer marketing a staple in their budgets, three major social platforms — Facebook, Instagram and YouTube — have implemented changes that negatively affect influencers’s audience reach and revenue generation.

Let’s start with Facebook. In January, Facebook announced changes to the platform that impact Pages. Specifically, it is now harder for someone to organically reach their followers on Pages. Articles declared these changes to be detrimental for companies/brands who use Pages to reach their customers, but a boon for influencers who partner with brands, because this change wouldn’t affect them.

Wrong. Influencers, particularly those who work consistently with brands on sponsored content, use Pages and not personal Facebook accounts to post content and reach their audiences. Using Pages allows influencers to use the branded content tool to provide disclosure, as well as analytics to their partners.

Influencers noticed the changes to Pages before Facebook announced them in January. Many influencers have seen organic engagement rate decreases of 30% or more over the last several months. How are influencers dealing with reduced organic reach? They are boosting posts. If an influencer has a sponsored post, they are now boosting (paying Facebook to push) these posts in order to ensure they hit contractual commitments for brand sponsorship deals.

But Facebook is not the only platform where influencers are facing a new algorithm reality. Instagram has made changes recently as well.

There is no question that influencers have invested time and energy over the last couple of years to build strong followings on Instagram. In fact, according to a recent study close to 80% of influencers reported that Instagram was their platform of choice.

Influencers love Instagram and have enjoyed strong engagement rates. In order to ensure that campaign analytics can be provided to brand partners for sponsored posts, many influencers use business accounts on Instagram. But recently, Instagram changed its algorithm for business accounts to work more like Facebook’s. Now, unless a piece of content gets immediate engagement, Instagram shows this content to fewer followers.

One instagrammer with close to 200,000 followers told me that she has watched her Instagram post engagement rate decrease by one-third over the last couple of months. Although her follower count has steadily increased over this same period of time, her engagement rate has dropped because not as many people are getting a chance to see her posts.

Of course, these changes aren’t just impacting Influencers — brands, too, are noticing decreased engagement with posts. One beauty brand, Anastasiabeverlyhills,recently posted this to its 15.9 million followers: 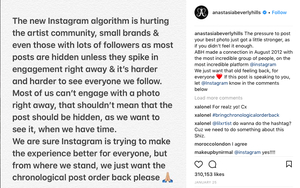 The post has received over 30,000 comments, mostly of support.

So, what are instagrammers doing in response to these changes? They are banding together to create groups who all quickly engage with one another’s content, not only to “heart it” but also to post comments in the hopes that this will build immediate engagement and therefore show their post content to more of their followers.

And if Facebook and Instagram changes were not enough, YouTube just announced changes as well. Starting Feb. 20, YouTube will not allow creators to participate in the YouTube Partner Program and monetize their channels if they do not have over 1,000 subscribers and 4,000 hours of watch time over the course of the last year.

While these changes will not affect influencers who have strong followings on YouTube, they will affect smaller creators who make passive income from monetization of videos on their channels. The dollars are not huge for these smaller YouTube influencers, but coupled with the Facebook and Instagram changes, Influencers are experiencing a ground shift.

What more can influencers do? In one word, adapt. One influencer told me that these changes are just reminders that, “You don’t own your audience on platforms like Facebook and Instagram. You are really just renting the audience. The only things that influencers own is their blog, email list and content. These changes are an important reminder for us to focus on those, too.”

There is no question that influencer marketing provides brands with strong benefits including trusted, viewable and compelling content. After all, 92% of consumers trust recommendations from people they know more than any other form of advertising.

With so many brands leveraging influencers to create and share sponsored content influencers are well positioned. The trick will be for them to continuously adapt as the social platforms do.