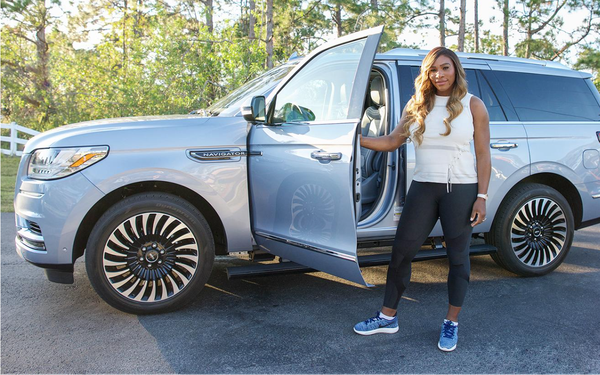 The Lincoln Motor Company has brought on tennis superstar Serena Williams for a social media campaign for the Lincoln Navigator SUV.

The relationship will be “ongoing” and is social media only, according to the company. Actor Matthew McConaughey will continue to appear in the brand’s TV spots.

Lincoln is the latest in a long line of endorsements partners for Williams including Beats by Dre, Gatorade, JPMorgan Chase, Nike, Tempur-Pedic and Intel. According to Forbes, she was the highest paid female athlete in 2017. Despite being sidelined with her pregnancy, her earnings between June 2016 and June 2017 of $27 million from prize money and endorsements are twice the total of any other female athlete in the world.

Williams’ first big vehicle purchase after one of her major tournament wins was a Lincoln Navigator that she named “Ginger,” and now she is driving the Navigator again as she moves into a new stage of her life — becoming a mom. Williams and husband Alexis Ohanian welcomed baby Alexis Olympia Jr. on Sept. 1.

Williams will share two 20-second teaser videos through her own social media channels and a 48-second video with Williams talking about Ginger is running on Lincoln’s YouTube channel. All content is produced by the media company Cycle.

She was selected for the role because both she and the Navigator share the attributes of “elegant strength, powerful acceleration and a standout presence,” according to the automaker.

“Serena is an amazing athlete who has won 23 Grand Slams, but she also has a family, she has her own clothing line, she sits on major boards, she’s philanthropic — she has all these competing demands on her time,” said John Emmert, group marketing manager, The Lincoln Motor Company, in a release. “We know that time is our Navigator client’s ultimate luxury as they balance everything in their busy lives, and Serena exemplifies that balance with poise and grace.”

Williams says she was attracted to the Navigator originally and now because of its safety and strength.

“I’ve always had a connection to the Navigator brand,” said Williams in a release. “When I bought my first car, Ginger, it was my big step-up. I had a real luxury car now, it looked great and I felt safe.”

She drove her first Lincoln Navigator for eight years, then passed it along to her niece.

“When the opportunity came to work with the Lincoln Navigator today, I was really excited because it brought me back to all of those moments I had in my first vehicle,” Williams said. “For me, partnering with a brand like Navigator comes from a genuine place.”

Today, Williams says the Navigator helps her balance a multitude of aspects in her life.

“Now that I have become a mom, I am in my car a lot more so my Navigator is like my new home,” Williams says. “I take business calls from it, I prepare for my day, and it’s kind of like Olympia’s room — she takes naps, she wakes up, and she’s comfortable in it. For me, that’s what’s most important. I want what makes me feel most comfortable and what I feel most confident in driving. The Navigator checks all of those boxes.”