After hosting a private screening of Marvel's "Black Panther" for top agencies on Thursday, National CineMedia (NCM) is now hoping those agencies will partner with the company's new interactive augmented reality gaming unit.

To play, audiences first download the app and arrive at their local Noovie theater early in order to view the Noovie pre-show entertainment, which will prompt them to take out their phone when it’s time to play. Then, the big screen and other triggers around the lobby will unlock the games enabled by aiming their cell phone.

In addition, a sales agreement between Regal Entertainment Group theater chains and Moviebill will introduce what NCM calls the first-ever augmented reality-driven “connected print” magazine. The magazine will enable readers to unlock exclusive content, special features and bonus material using their mobile phones as well as AR experiences from major studios and brands.

The platform was developed in-house by NCM to actively engage movie fans and expand its offerings among brands and advertisers seeking more than traditional activations. NCM says it can work with any advertiser, studio or network to create a custom branded game for the big screen, such as a driving game for Lexus, or a game featuring the Gecko for Geico.

“Noovie was designed around the three pillars of content, commerce and gaming, and I’m very proud to introduce the first in-theater AR gaming experience to the industry,” stated Cliff Marks, President of NCM. “Noovie ARcade drives fan engagement and excitement through a unique digital experience, which makes it not only great entertainment for movie audiences, but a great opportunity for brands looking to reach them.”

Noovie ARcade is available in the iOS and Android app stores. It will be rolled out nationwide this spring on over 20,600 screens in 1,700 top theaters across the country including AMC, Cinemark, Regal Entertainment Group, and 49 other regional and local theater chains. 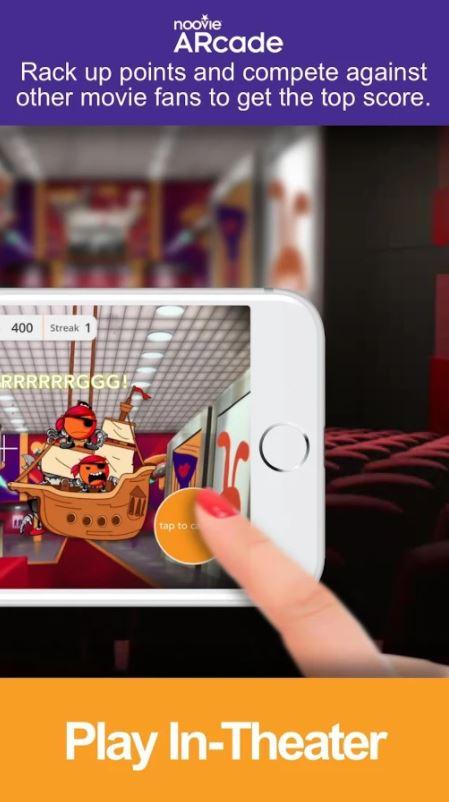