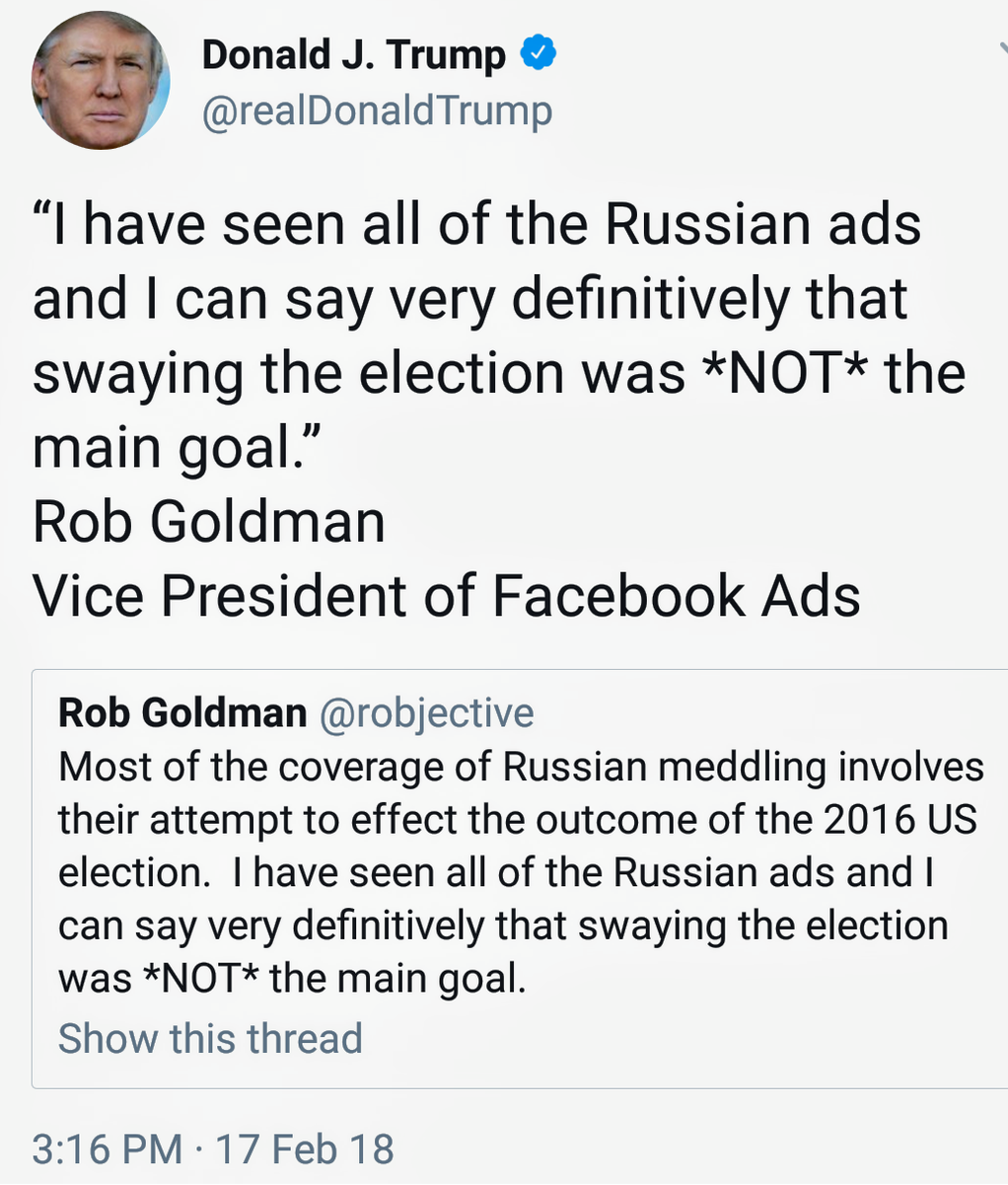 President Donald Trump enlisted comments by Facebook Vice President-Ads Rob Goldman to support his claim that Russia’s paid ads on U.S. social media did not influence the outcome of the U.S. Presidential election.

“The Fake News Media never fails,” Trump said in the first of two tweets Saturday afternoon, citing comments made by Goldman on Twitter.

“Hard to ignore the fact from Vice President of Facebook Ads, Rob Goldman!,” Trump continued linking to @robjective’s tweet asserting: “The majority of the Russian ad spend happened AFTER the election. We shared that fact, but very few outlets have covered it because it doesn’t align with the main media narrative of Tump [sic] and the election.”

In a subsequent tweet, Trump quoted Goldman as tweeting: “I have seen all of the Russian ads and I can say very definitively that swaying the election was *NOT* the main goal.”

U.S. counterintelligence experts and Congressional investigators probing Russia’s use of advertising on Facebook and other digital media platforms have concluded that Russia’s goal was to influence the U.S. by reinforcing division among Americans as part of its active measures.

Deputy Attorney General Rod Rosenstein announced an indictment against 13 Russian nationals who committed “information warfare against the United States. The indictment, which came as part of Special Counsel Robert Mueller’s investigation of the Trump Campaign’s ties to Russia, asserts their goal was “spread[ing] distrust towards the candidates and the political system in general.”

“Very excited to see the Mueller indictment today,” Facebook’s Goldman added in a subsequent tweet, continuing: “We shared Russian ads with Congress, Mueller and the American people to help the public understand how the Russians abused our system. Still there are key facts about the Russia actions that are still not well understood.”

On Saturday, Goldman tweeted that Facebook is taking “aggressive steps to prevent this sort of meddling in the future by requiring verification of political advertisers and by making all ads on the platform more visible to anyone who cares to examine them.” Goldman linked to a press release Facebook announced about those actions four months ago.