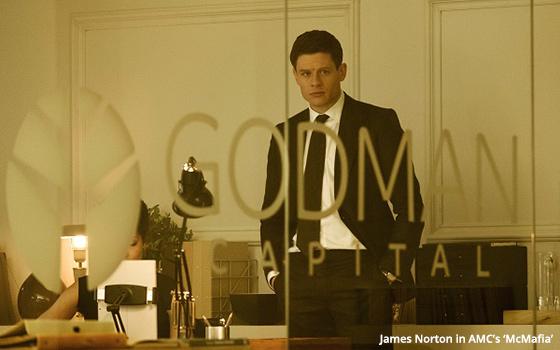 A new crime drama coming to AMC next week takes a thoroughly modern approach to depicting its world of international criminals, the underworld networks they control and the tangled webs they weave.

The series is called “McMafia,” and its very name reveals its point of view. International crime organizations are not very distinguishable from multinational corporations and the financial institutions that support them -- all of which operate globally, and according to this show, are not averse to bending the rules, or in some cases breaking them.

In the premiere episode, a conversation between one such banker -- a man named Alex Godman (played by the series’ star, James Norton, photo above) and a shadowy Israeli and former Russian (played by David Strathairn) -- literally lays out the parallels between international crime and McDonald's, although McDonald's might want to contest this show's point of view.

Consisting of just eight episodes, the show is described by AMC as a “thriller,” and it earns the designation from the outset. It is a very attractive, far-flung crime series, with on-location scenes filmed in Israel, Egypt, England, Russia and possibly France (I wasn't quite sure of this one).

Norton's character is the central figure in the show. He is by all accounts a successful investment banker who manages his own firm. But his father is a former Russian businessman with connections (if not full participation) in Russian underworld circles.

When his family becomes threatened by figures from his father's past, Godman tries to protect them (and himself), and in the process, he himself gets pulled over the dividing line between legitimate business and criminal activity.

The symbolism of his character's name seems as obvious as the show's “McMafia” title. This show seems to be saying that with his power to move millions of dollars, he is half-god, half-man. Whether this “God-man” will triumph in the end is anyone's guess -- or no guess if you wish to watch all eight episodes at one sitting next week.

After the show's premiere is seen Monday night (February 26) on AMC, you will have that opportunity to watch the rest of it. Precisely at 11 p.m. Eastern, all eight episodes will begin running on AMC's premium, pay service known as AMC Premiere.

Launched last year, AMC Premiere can be bought for a $4.99 monthly fee on your cable bill (although an AMC press release says it is available only “to Comcast Xfinity customers”).

Lately, it seems as if news and announcements about these kinds of SVOD offshoots from commercial-supported networks are coming out with much greater frequency.

This is because we have now entered the era in which commercial television has begun to accelerate its evolution to the pay-to-stream model, plunging us into a situation in which both modes will coexist until such time that a tipping point will emerge in favor of one or the other.

The industry has been talking about this evolution for years. And now it is here. Are commercials doomed?