Spotlight On Facebook: Is it 'Good For The World'? 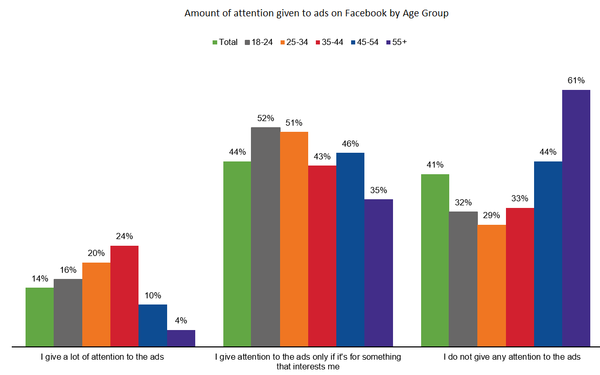 Almost half of Americans surveyed this month agree with the statement that Facebook is “good for the world.” But where opinions differ sharply—and negatively—is among survey respondents who don’t have an active Facebook account.

More than half (55%) of non-Facebook users disagree with the statement that the social media giant is “good for the world” while exactly the same percentage of Facebook users agree.

When it comes to advertisements, 41% of those with an active Facebook account say they do not give any attention to ads served. Users 55 and older were the least likely to pay attention to any ad on Facebook, regardless of ad content. The other age cohorts (18-24, 25-34, 35-44, 45-54) are more likely to pay attention to ads that are of interest to them than they are to completely ignore all ads. More than half (63%) of Facebook users between the ages of 18 and 24 report they had clicked on an ad within the last 30 days, which was the highest percentage among any age group.

The survey finds that the frequency with which people use their Facebook account is very high. Among all Facebook users interviewed, just under 70% visit the site at least once a day, with 44% reporting multiple visits per day. Female users tend to interact with the site more frequently, with 50% saying they visit more than once a day, and only 38% of males reporting the same frequency. Across both genders, those between the ages of 35 and 44 are the most likely to visit multiple times a day.

The sample consisted of 1,000 adults nationally balanced by age, gender and region surveyed by kNOW, the on-demand product from global survey provider Critical Mix. For purposes of the survey, an active Facebook account was defined as one that is used at least once a month.

The device used most often to visit Facebook among survey takers is very close between desktop/laptop and smartphone. Desktop / laptops won out by 2%, with the numbers coming in at 48% and 46%, respectively. Among 18-24 year olds, 87% cite their smartphones as the device of choice when visiting Facebook, while the same percentage of those aged 65+ prefer a desktop or laptop for browsing the platform.