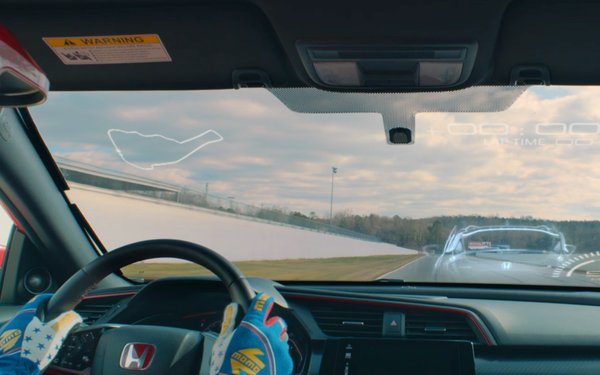 To promote its 2018 Civic Type R, Honda partnered with Forza Motorsport and invited a race car driver and a pro gamer to compete in a mixed-reality race.

R vs. R pits pro IndyCar driver Graham Rahal and pro gamer Peter Jeakins. It started out at Microsoft’s (publisher of the Forza Motorsport Series) Turn 10 Studios in Seattle where Jeakins (known to the gaming world as theSLAPtrain) recorded his fastest lap time in a virtual Type R at the Road Atlanta race track in Forza Motorsport 7.

The race continued at the actual Road Atlanta in Braselton, Ga., where Rahal raced a real 2018 Civic Type R against Jeakins’ virtual one. The real Type R was outfitted with a custom-made mixed-reality windshield that broadcast the gamer’s position on the track to Rahal in real time, allowing him to compete in a head-to-head race against the gamer.

R vs R is the first time augmented reality has been used to merge real motorsport with a racing simulation, creating a unique and innovative stage for the virtual world and the real world to battle it out once and for all, according to Honda.

“We also targeted the technology audience to capture interest in the AR technology behind our activation,” Fini tells Marketing Daily. “The final audience is a general interest one, which encompasses the Honda Civic and sports fans.”

“The Honda Civic Type R is a race car disguised as a daily driver,” Fini says. “It was inspired by Honda’s rich racing history and many of those who purchase it will take it to the track. So the race track was the natural place to show off the Type R’s attributes.”

According to the 2017 annual report published by the Entertainment Software Association, 47% of gamers are between age 18 and 49 and 65% of homes own a video game-playing device, while 48% own "a dedicated game console.” The average male who plays games is 35 and the average woman is 44.