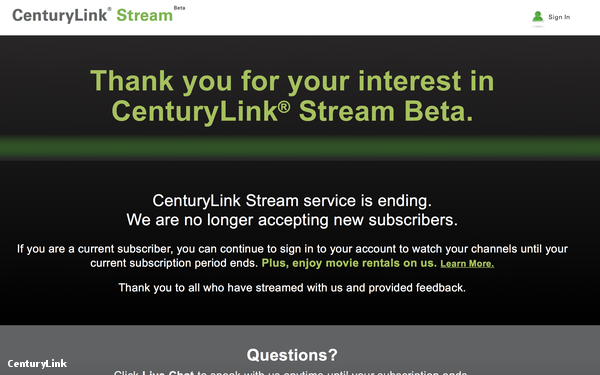 Telecom company CenturyLink is shutting down its CenturyLink Stream over-the-top video service. The company says that the OTT bundle will go offline at the end of March.

CenturyLink Stream was one of the players in the increasingly crowded OTT “skinny bundle” category, which has telecom companies like Dish and DirecTV and tech companies like YouTube, Hulu and FuboTV competing to offer bundles of cable channels delivered over the internet rather than direct to cable boxes.

CenturyLink’s product launched in beta in June 2017, with prices starting at $45 per month. The company never released subscriber figures for the service, which was available on a number of connected TV devices.

Ultimately, however, the regional company did not have the name recognition or the marketing budgets that national companies like DirecTV and Hulu have, making adding subscribers a challenge.

Recent surveys estimate that more than five million households now pay for OTT bundles of cable content, with Dish’s Sling TV and DirecTV Now leading the pack. That is small potatoes compared to the traditional cable ecosystem, which has 10s of millions of subscribers, but as more and more services enter the fray—and as some existing services tap out—the market is poised to shift online, and to a few big winners.