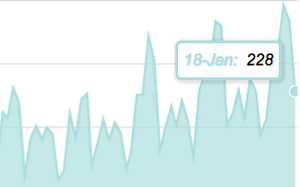 The U.S. advertising market made hefty gains in January, growing by nearly 11%, according to Standard Media Index -- mostly due to gains from awards shows on broadcast TV and generally higher digital media spending.

National TV spending grew 7.1% for the month over the previous year -- an 11.1% increase for cable TV networks and a 2.7% rise for broadcast networks.

One major factor was CBS’ airing of “The Grammys” in January versus February 2017. Without “The Grammys,” national TV spending grew 5.3%. Just looking at broadcast networks, excluding “The Grammys,” advertising revenues were flat versus January 2017.

During the month, NBC witnessed a 7.1% hike for its “Golden Globes Awards” to $32 million. SMI says that for “The Grammys,” CBS rose 3.8% to $61 million versus last year’s airing in February.

Cable TV news networks had another stellar month -- up 25% versus January 2017. MSNBC was in the lead, rocketing up 62% in advertising revenues. CNN also had strong gains -- up 32%. Fox News Channel rose 17%.