When You Absolutely, Positively Have To Do Something 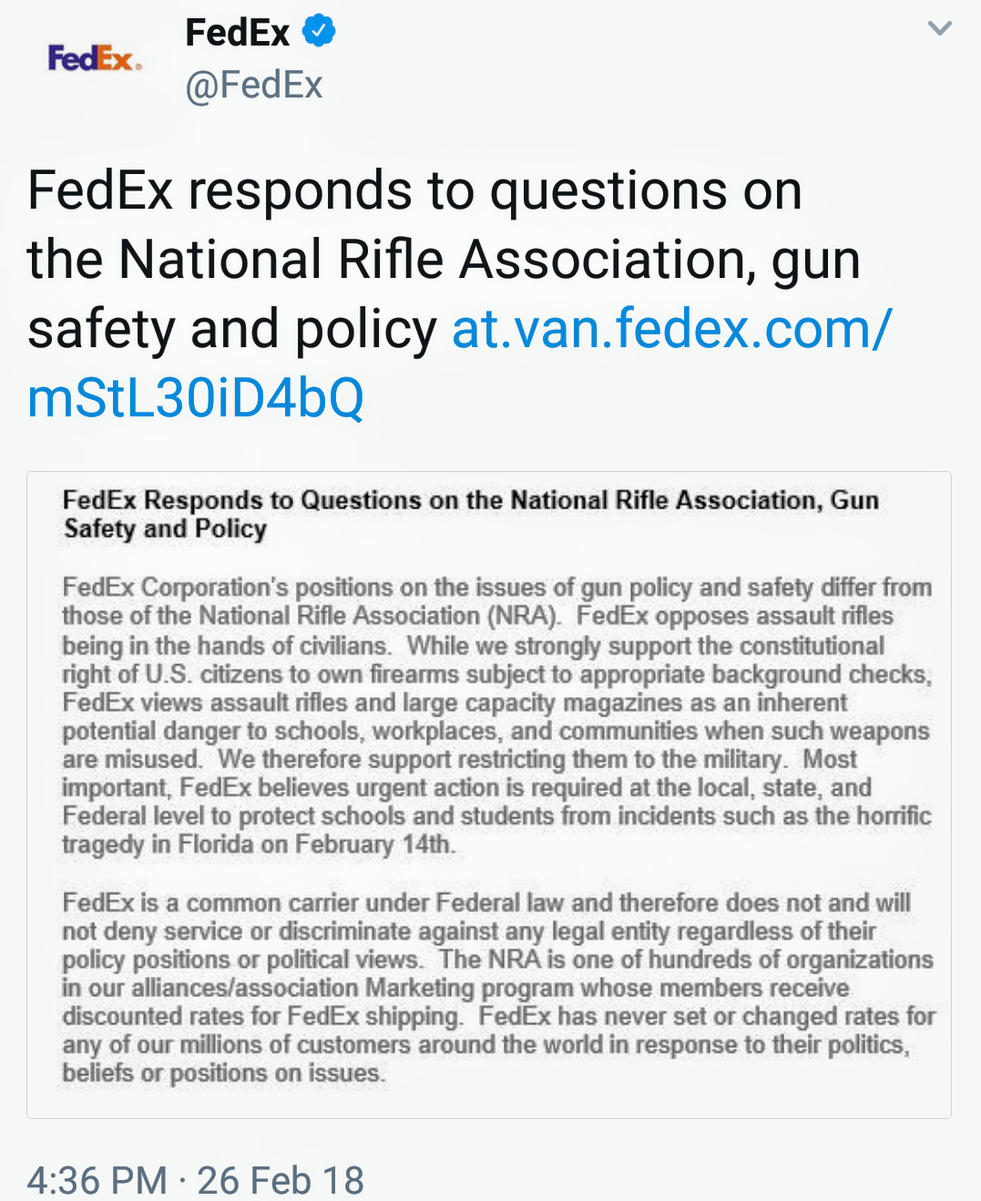 Last week, I wrote about findings of the most recent CMO Survey indicating that most would like to lean away from politically charged issues. Makes sense, but the survey did not address what happens when your brand comes under fire due to news events, like the one that happened when high school students came under fire, and a grassroots boycott spawned to boycott brands collaborating with the National Rifle Association.

To date, more than a dozen national brands have announced they are parting ways with the NRA due to #boycottNRA, including many in the transportation industry, such as rental cars and airlines that had offered promotional discounts to NRA members. (You may recall from last week’s columns that 100% of CMOs in the transportation industry eschewed politically charged issues.) But one notable one is standing its ground: FedEx.

In its official statement responding to the issue, FedEx said it is a “common carrier under federal law and therefore does not and will not deny service or discriminate against any legal entity regardless of their policy positions of political views.” The statement is ironic, because FedEx’s promotional deal with the NRA does discriminate -- favorably -- on behalf of NRA members, providing them with discounts of up to 26% on FedEx shipping costs.

Policy positions and political views aside, it’s a free marketplace. So after more than two decades as a FedEx shareholder, I’m dumping my shares today. It’s a small gesture -- I have a tiny position in a long-term IRA -- but I went into it in the late 1990s, because I believed FedEx was a company for the future, especially as the ecommerce marketplace was poised to explode.

Kudos to Dick’s Sporting Goods for banning sales of assault rifles, and to all the brands ending their promotional deals with NRA members. Some things are more important than money -- especially people’s lives. Especially the lives of young people in America’s schools, and the adults who teach them. As the husband of an American public school teacher, I’ve gotten to see up close and personal how the rise of school shootings using assault weapons impacts educators and students, ever since Sandy Hook.

Last week, I met with an old friend, Engagement Marketing Group CEO Bob DeSena, whose daughter is a schoolteacher, and he said: “We have to do something.” I told him I’m game, but the question is what? I pointed out that the student movement already has wings, and has already led to things like #boycottNRA.

Bob said it shouldn’t be a political issue, but a form of activism and support that makes American schools safer. I can’t imagine anyone would disagree with that. The only debate is over policies of how to do that.

So let me pose the question: what can the advertising, media and marketing industries do to help? Bob says he’s game to help organize that, and I told him we’d be happy to use this publication as a platform to inform it. If you’ve got any ideas, or would like to participate in a roundtable discussion about it, contact joe@mediapost.com.