'Mr. Serena Williams' Welcomes Wife Back To The Tennis Circuit Via OOH

Wow, Alexis Ohanian is a smartie. That’s not news, he’s a Silicon Valley tech investor and co-founder of Reddit.

But today he really outdid himself, combining an “aww, that’s so beautiful moment” with a bit of shameless hucksterism for an Out-Of-Home advertising company he’s invested in.

Wait, now that I say that, is there really any such thing as shameless hucksterism these days? I mean, you gotta break through all the noise right? Especially in today’s hyper-competitive environment.

Anyway, as you may know, Ohanian is married to tennis great Serena Williams and they had a beautiful bouncing baby girl named Alexis Olympia back in the fall.

Today Ohanian celebrated with a series of billboards (yet another sign [so to speak] of the medium’s revival) that appeared on the I-10 highway leading into Palm Springs.

The messages welcome Williams back to the tennis circuit after a break to give birth and have a little bonding time. She’s returning to tournament play at Indian Wells early next month.

The four outdoor signs all feature the five-month old baby along with messages that state "Greatest Momma of All Time" and the last stating "Serena Williams G.M.O.A.T. Alexis Jr + Sr."

Yeah, that is definitely an “awwwww” moment.

A PR rep was quick to point out that the ads were planned, and designed by Ohanian himself, and purchased via AdQuick, a startup software OOH system that Ohanian’s investment company led the seed investment round for last year. "It took him exactly 15 minutes to execute," the rep noted.

“We’ve seen pitches for this business for almost a decade,” Ohanian wrote in a blog at the time, explaining the decision to invest. “But this was easily the most impressive technical execution and at a remarkably early stage.”

Talk about mixing business with pleasure. Yeah I’d say that’s a win-win for the Ohanian family.  And what a cute kid. 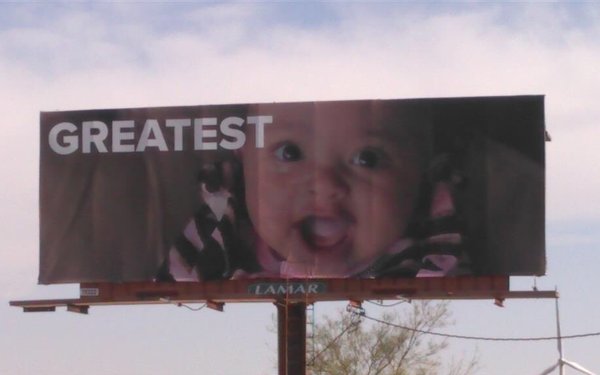