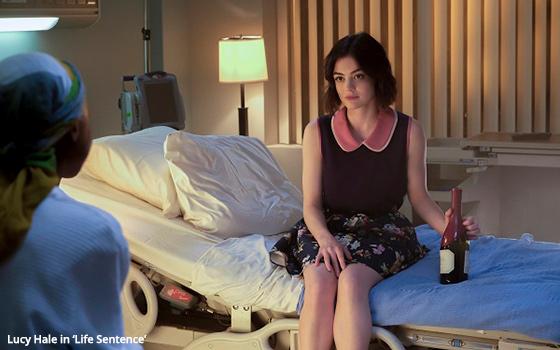 For the second time this year, a new CW series gets a thumbs-up review here.

So far, the mini-network is batting a thousand in 2018. The previous show was “Black Lightning,” which premiered in January.

Today it’s “Life Sentence,” premiering Wednesday night -- a drama about a young woman who battled cancer for eight years and assumed her illness was terminal.

Then, following a new treatment, she is cured, and now faces the challenge of living a real life instead of a life that could end at any time.

After her “all clear” diagnosis, however, her life falls apart as her family members reveal secrets they have kept from her throughout her illness.

The scenario is very affecting and creative. An additional adjective I would use for this show is “surprising.”

Much of what happens is not predictable -- which is quite an achievement when producing a TV show since so many of us have been watching TV for so long that predicting what happens next on many shows is something we do instinctually (and with notable accuracy).

It is also true that this show -- at least the pilot I watched -- played at times like a cancer music video (thanks to the nearly continuous soundtrack of pop songs). In addition, the actress in the lead role, Lucy Hale, hardly looks like a person who ever had cancer. Despite that, she's great in it.

This show is certainly aimed at younger people. The young-woman character at the center of “Life Sentence” has been created to appeal to young women -- not that there’s anything wrong with that.

I could not be further removed from this show's target audience, but I liked it anyway.

The following statement might sound like damning this show with faint praise, but it is actually the highest praise I can ever bestow on a TV show: “Life Sentence” is not stupid.

Why is that high praise? Because so much of TV is unrelievedly stupid -- not to mention crass, vulgar and insulting.

In fact, so much of TV -- in both the scripted and unscripted realms -- is so stupid that it is reasonable to conclude that making stupid TV shows is among the easiest tasks there are in the whole wide world.

With that in mind, coming out with something as original, surprising and not stupid as “Life Sentence” represents a rare achievement.

Thank you, CW, for continuing to surprise us.