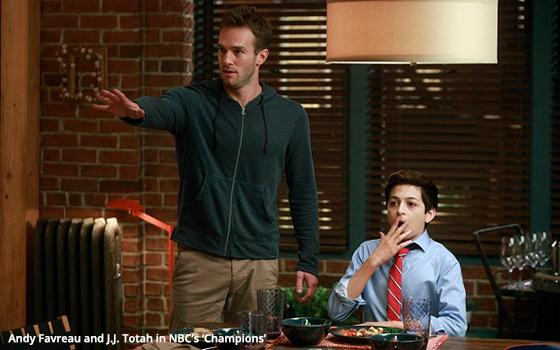 NBC's new comedy “Champions” is about a gay teen who is to be raised by his estranged father and an easygoing uncle in Brooklyn.

The gay teen is 15, and he is obnoxious -- a sarcastic eye-roller who insults people. Yes, he is a “type,” but he is also a stereotype who might make some viewers do their own eye-rolling if they watch this show. It premieres Thursday night.

The scenario here is this: This boy from Cleveland named Michael achieves his dream of being admitted to a prestigious school for the performing arts in New York. He is played by J.J. Totah (seen in the above photo).

In the pilot, Michael's mother -- played by Mindy Kaling -- brings him to New York and, as the result of a snafu having something to do with pedophilia (don't ask), the boy is un-admitted and forced to audition again for admittance to the school.

But he needs a place to stay in New York and his mother has no money. So suddenly, she decides to look up the boy's father with whom she had a torrid affair some years back but has not seen since.

At some point, the boy is casually informed that this man is his father. And so it goes. Cut to the chase: The boy moves in with his father, who lives with his brother (the boy's uncle) in Brooklyn (it's not really Brooklyn, but a fake Brooklyn that looks like it has been fabricated on a Hollywood backlot somewhere).

The father and his brother own a Brooklyn gym called Champions, but the teen boy they are now caring for has no interest in sports. And that’s the show.

Mindy Kaling is credited as a co-creator of the show, along with Charlie Grandy, a comedian. He is the son of Fred Grandy, an actor famed for playing ship's purser “Gopher” Smith on “The Love Boat” and later served one term as a U.S. congressman from Iowa.

Favreau looks so much like James Van Der Beek from “Dawson's Creek” that the resemblance serves as a distraction when watching “Champions.”

Of course, when watching a show like this, many things can serve as a distraction -- such as your watch, for example, as you repeatedly glance at it to determine how soon this show will be over.

Also look out for birds flying by your window, ladybugs, butterflies, moths, an occasional leaf drifting by -- all of these things might be capable of drawing your attention away from this show. In fact, almost anything will.

Not that the performers in the show don't try real hard to keep you riveted. In the process, they over-sell it.

When they converse, they talk fast and employ a host of exaggerated gestures -- elbows bent 90 degrees, forearms thrust forward, both palms upturned while moving their heads in short, jerky up-and-down movements or thrusting their faces forward with such effort that they seem to strain the muscles in their necks.

Unfortunately, these physical efforts cannot make up for the material they are working with. The stakes are not really that high. And all the gesturing in the world won't make you care.

tv
1 comment about "NBC Sitcom About A Gay Teen Is Eye-Rolling Waste Of Time".
Check to receive email when comments are posted.
Next story loading