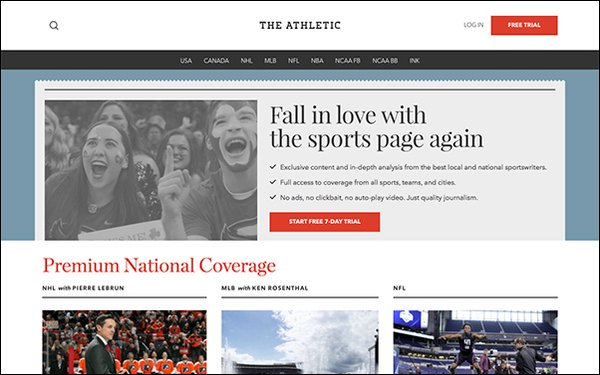 With conservative Cox Media site Rare.us tanking just a week after Little Things announced its closure, many sites are finding it harder to rely on digital ad dollars to sustain business.

That's why some publications are turning to membership and subscription services for survival.

Slate has found success with its membership plan over the past few years. The Atlantic is preparing to amp up the offerings on its own, with a new infusion of funds from a partnership with the Emerson Collective.

Now, in an extreme example of subscription-based experimentation, sport site The Athletic announced yesterday it has secured an additional $20 million in funding to further expand its subscriber-sustained publication.

According to The Wall Street Journal, The Athletic has decided to go all in on its subscriptions. It is positioned as a reader-supported, ad-free alternative to traditional sports coverage. In some ways, this is a model that could only work for a start up.

The company isn’t yet profitable (though some markets, like Chicago, are), and the rounds of funding are allowing it to set up a structure that is highly experimental. However, the site’s subscribers are already in the six figures. Subscriptions cost $8 a month or $48 a year.

According to The Athletic, 90% of its subscribers renew annually, and its oldest markets are growing by 20% month to month.

The startup plans to expand across the U.S., hoping to establish “a presence in every market with a professional sports team by the end of the year,” thanks to this round of funding. It wants to employ between 200 and 350 staff by the end of 2018. Currently, The Athletic employs 120 people.

So far, the model is also allowing The Athletic to offer a secure environment for writers, offering them a piece of the company, contracts and premiums on salaries from their previous jobs in some cases.

The site is still new and the model untested; potential sponsorships for events and podcasts could come in the next few months. With the increasing instability of digital advertising dollars and so much of a publication’s success placed in the hands of giants like Google and Facebook, publications have to take explore new avenues.

As readers watch their favorite publications die a digital death, perhaps an urgency will set in. While a subscription-based model may not be entirely sustainable, the sweet spot between reader and ad-supported journalism may emerge, revealing a balance of revenue streams that work.