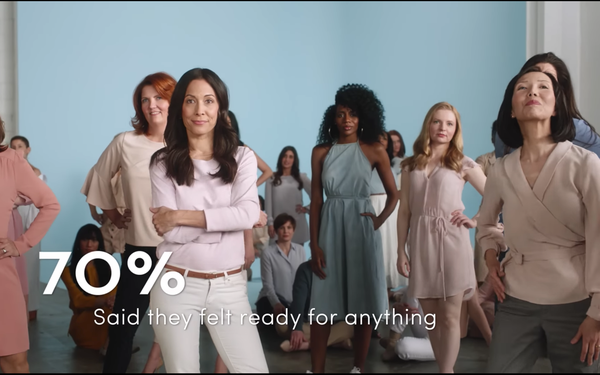 Add Clairol’s Nice’n Easy to the list of marketers out to win women over with psychological grit: Its new “Color Fearless” campaign highlights the quick confidence boost some women get from changing their hair color.

The new effort, similar to Dove’s long-running “Real Beauty” efforts and Pantene’s focus on strength, uses a social-media experiment to show women what coloring their own hair can do for them: One hundred women try its new Nice'n Easy Color Care and then report back, with 85% claiming they felt more confident after coloring/

They also said they were more likely to get and give compliments, flirt, go on dates, speak up at a meeting and ask for a raise. The effort supports the newly relaunched product line, reformulated for both effectiveness and odor control.

"Beauty today is all about celebrating what you love about your look, but women are still hesitant to try at-home color because of real concerns about damage, allergies and unnatural results,” Rosi Ajjam, Coty’s senior vice president for retail hair, says in its announcement. “By allowing women to color fearlessly, we're taking away barriers and opening up a new world of transformation and self-expression."

The campaign is also using beauty influencers to spread the word, and Clairol says it plans to expand the effort to include Fearless Color stories from women with different hair types, lifestyles and passions.

Clairol, which rode to fame on its 1950s’ "Does She or Doesn't She?" positioning, is now owned by Coty, which bought it from Procter & Gamble back in 2016. But its consumer beauty division, which also includes Cover Girl, has been under pressure. In quarterly results released last month, it told investors it has seen significant improvement in the division.

Part of the problem is that despite all the vivid pink, blue and peacock tresses out there on the streets, the home haircolor market is flat, due to “preferences for natural looks, concerns over damage, and ombre styles, which have made roots less taboo,” reports market researcher Mintel. In fact, its latest report finds that even salon coloring visits have declined.

When they do color their own hair, they are demanding products that look more natural and are better for their hair. It forecasts sales of $2.25 billion this year in the U.S., relatively unchanged, and it expects sales to continue to be flat through 2021.Exceptions include younger consumers, who are more likely to experiment with bold (albeit temporary) colors, and men.