IPG's Golin Unveils Its 'Have Her Back' Initiative 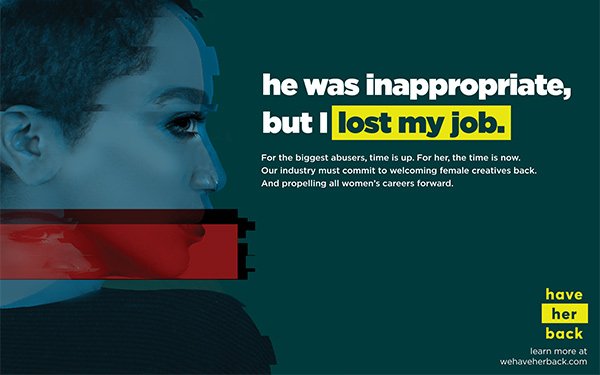 In wake of #MeToo and Time’s Up, PR firm Golin, part of Interpublic Group, has partnered with The 3% Movement, SheSays and EvolveHer  in a further bid to empower women and their careers.  The Golin effort is specifically aimed at helping women jumpstart their careers as they reenter the marketing industry workforce for any number of reasons including being forced out as a result of sexual harassment or assault.

The effort has been dubbed “Have Her Back,” and as part of it Golin has set an internal goal to have equal representation by women and men in positions of power around its creative table.

“Our industry says the right things, but hasn’t been quick to take action,” said Caroline Dettman, Golin’s chief creative officer and creator of the campaign. “In the past few months, we have seen some high-profile harassers lose their jobs. And while that is progress, there’s a question that’s been keeping me awake at night: just how many women’s career trajectories and wellbeing lie in their wake?”

According to the agency “Have Her Back” will focus on hiring, training and “creating cultures of empowerment.”

The firm is partnering with The 3% Movement to co-create “Manbassador” trainings – designed to address how men can best support and advance women in the workplace.

“The 3% Movement has spent the last seven years understanding what separates creative cultures that are inclusive from those that are not,” stated Kat Gordon, Founder of The 3% Movement. “Here’s what we know: men must be involved in gender diversity efforts; all employees must be given a safe mechanism for honest feedback; having 25%+ women at the top self-corrects most issues combating women.”

Other programs are also in the works including a training event in Chicago set for next month.

“The irony is not lost on me that as agencies, we say that female equality matters to us, yet our actions or inactions say otherwise,” added Dettman. “As creatives, we inspire our clients to right wrongs and improve the human condition every day. I have a lot of hope that it’s these same people who will practice what we preach and take action to show we have her back.”

More about Golin’s new effort can be found here.