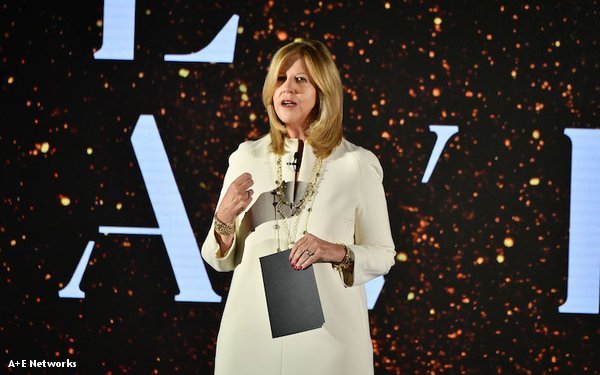 A+E Networks, in the midst of a leadership transition, projected an aura of confidence at its upfront presentation Thursday evening.

As media buyers mingled under a crimson-lit ceiling in Astor Hall at The New York Public Library, the company readied a lineup of all-female talent to make the company’s pitch downstairs in the Bartos Forum.

“Quality storytelling is the engine that drives our business -- it is what makes great content and attracts audiences that marketers want to reach,” “Live PD” host Dan Abrams said at the top of the presentations.

“Growth. Quality brands. Safe environment. Full transparency,” said A+E’s ad sales chief Peter Olsen, recapping the key points at the end of the night. “So, in the weeks ahead, we ask that you challenge us to help you achieve your goals. Whether your need is reach, targeting or even help in telling your stories. We are poised to help.”

Among the programming the company unveiled: a series of 100 documentaries that will air over multiple years, called the “History 100.” Subjects will include Mikhail Gorbachev, Watergate and a look inside Air Force One during 9/11.

Queen Latifah announced that Lifetime cameras would follow her as she remakes her first hit single “U.N.I.T.Y.” with a slew of female artists.

Leah Remini, whose "Scientology and the Aftermath" was renewed for a third season, promised that her new A&E deal to produce other projects would allow her “to expose other institutions that prey on the vulnerable and expose their patterns of abuse before any more people have to suffer.”

Nancy Dubuc, who earlier this week announced that she would be leaving A+E Networks to become CEO of Vice Media, was not at the event. In her place, the company’s chairman and former CEO Abbe Raven led the presentations.

"Right now there is this arms’ race for content, with technology companies spending billions of dollars, but we have something they don’t -- which is the ingenuity and imagination of our employees," she said. “We have the capabilities to tell stories from six seconds to six hours on every platform.”

Dubuc may not have been in attendance, but Raven made light of her absence after Abrams left the stage.

“Thank you Dan, congratulations on the success of ’Live PD.' We are so excited for your upcoming A&E series with Nancy,” Raven said, pausing before adding the last name “Grace.”