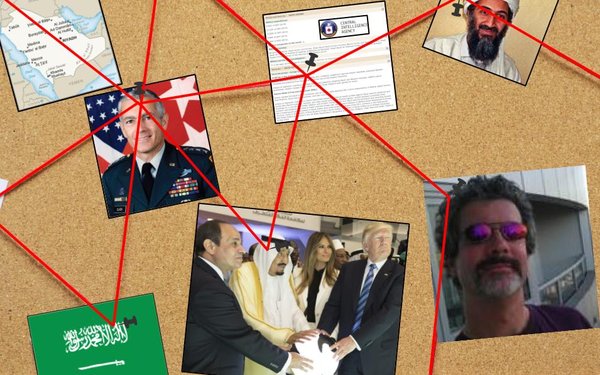 Of all the strange, mysterious, historic global events with a ton of unanswered questions that have taken place since the Reality TV President was (s)elected, none has left as many dangling loose ends — with more threads added by the week — as what really went down in the Kingdom of Saudi Arabia (KSA) on November 4, 2017.

That was the day young Saudi Crown Prince Mohammed bin Salman (only 32, and now also KSA’s First Deputy Prime Minister, Minister of Defense and President of the Council for Economic and Development Affairs) ordered the blitzkrieg arrest of what was first reported as dozens but KSA now claims were 381 of the nation’s most powerful and influential people.

That included more than a dozen members of the royal family. Which, if you’ve read any history of The Kingdom, was absolutely a mind-blowing, paradigm-nuking development.

The Official Story was that the roundup was due to the horrific corruption inside KSA, now being cleaned up by the noble and idealistic young prince Salman, who wanted to modernize the nation. Like most Official Stories, there was some truth to that.

But as all things are in our ever-ambiguous-by-design world today, media consumers could also find pundits and genuine news sources that would support a different worldview. That this was actually a ruthless power grab by an ambitious young prince who simultaneously symbolically decapitated all his enemies in one felled swoop, like a Muslim Michael Corleone in an Arab remake of the legendary final sequence of “The Godfather."

There were many simultaneous events that occurred that day that have been lost down the memory hole. Right before the Prince’s gambit, there were reports of explosions in the KSA capital of Riyadh, later updated as a missile attack from Yemen, which proved totally convenient. It allowed Salman to escalate KSA’s aggressive bombing of that stressed Mideast country.

Likewise, there has not been much followup on the initial day’s reporting of a helicopter loaded with Saudi royalty that "crashed" as the takedown was going down. The New York Times was not alone in suggesting the "crash" was just a coincidence—

"In what appeared to be an unrelated episode, a helicopter carrying another Saudi royal, Prince Mansour bin Muqrin, the deputy governor of Asir Province, which borders Yemen, crashed on Sunday, killing the prince along with a number of other officials….."

—although the sheer un-plausible deniability of that dubious paragraph deserves note. Prince Mansour has since almost disappeared from the public record. R.I.P. and goodnight, oh-so-coincidentally, sweet prince.

Some of the arrests were eyebrow-raising, although never confirmed. This story, for example, from a usually credible Mideast news source, has been edited since it first appeared.

Originally, it reported that Prince Bandar bin Sultan Al Saud, the former head of Saudi intelligence, nicknamed “Bandar Bush” for his closeness to the former presidents’ family — as well as the most prominent Saudi official connected to the 9/11 attacks via the finally-declassified “28 Pages,” was among those arrested. The Saudis never confirmed nor denied, but the published story was edited days later to note that “sources” indicated Prince Bandar was not under arrest.

True? Not? Impossible to say, other than that Bandar Bush has been conspicuous by his absence from additional and more recent reporting about Saudi Arabia.

Another interesting name not widely reported at the time of the corruption crackdown or since is also related to the 9/11 attacks: Bakr bin Laden, half-brother of you-know-who and Chairman of the Binladen Group, KSA’s largest construction conglomerate, arrested and still wearing an ankle tracker.

I won’t say he hasn’t been mentioned at all, but you’d think the arrest of OBL’s bro would be bigger news — best I can tell The Washington Post has mentioned his name once, back in November, The New York Times finally got around to it last week. Search around yourself; you’ll see.

The highest profile “celebrity” in the arrests was Prince Alwaleed bin Talal, the jet-setting billionaire who hobnobbed with movie stars and politicians, and at one point held (and probably doesn’t now but who knows?) large and sometimes primary stock ownership in Twitter, Citibank, NewsCorp, Apple and other renowned brands.

After that, a shroud of silence.

Two months later, Prince Talal emerged, looking a lot thinner and much worse for wear, unconvincingly claiming it was “all a big mistake,” in a very tightly controlled Reuters exclusive interview from the hotel.

Since then, Talal and others named and unnamed have been released, gotten the ankle bracelet, lost their personal communication devices and are not allowed to talk with the press, not even to comment about how all of them have been dropped from Forbes’ annual list of the world’s richest people.

What kind of deals were cut when Trump toured the Middle East? Remember all the weird symbolic stuff that went down, like this crazy collection of megalomaniacs? How about the bizarre public sword dance while he was in Saudi Arabia? Isn’t that all very odd for a man who publicly claimed the Saudis were behind 9/11 while he was running for president?

So who does the new leader of KSA actually serve? Because for all the chessboard piece maneuvering, it appears the global endgame being pursued remains, essentially, “seven countries in five years,” as revealed by General Wesley Clark more than a decade ago. That's a strategy outlined in a post-9/11 "memo that describes how we're going to take out seven countries in five years, starting with Iraq, and then Syria, Lebanon, Libya, Somalia, Sudan and, finishing off, Iran."

It has taken more than five years, but you see how it’s going, right?

Iraq, Libya, Somalia, Lebanon — they have all been tossed. Syria is on the razor’s edge in a faux civil war. And for all of Prince Salman’s talk of modernization — allowing movie theaters and women to drive (women in burkas, that is) —  it may well prove that the young prince’s aggressive stance against Iran’s Ayatollah is what will keep him so appetizing to the new boss. Same as the old boss.