Grocery Chain Lidl Has A New Agency And A New Campaign

Grocery chain Lidl has appointed The Martin Agency as its new U.S. agency. And they officially kicked off their partnership this week with the launch of the “Don’t Let Them Waste Your Money” campaign.

The series of multiplatform ads caricatures what the company refers to as “the broken and bloated supermarket shopping experience many Americans face,”  and highlights the better and lower cost experience at Lidl stores.

The new ads come shortly after a study from the University of North Carolina Kenan-Flagler School of Business found Lidl prices to be up to 50 percent lower than nearby retailers.

“This new campaign is designed to raise awareness about the costly inefficiencies of traditional supermarkets and the savings that Lidl’s streamlined approach brings to customers every day,” stated Elina Elvholm, director of brand marketing at Lidl US. “When customers shop at Lidl, they experience less complexity, lower prices, and better quality choices.”

The inaugural series introduces the The Vanhills, a fictional family that owns a large chain of supermarkets. The Vanhills are consumed with using supermarket tricks to con customers into paying more for inferior products and inefficient practices.

One spot focuses on the “Apple Pyramid” scheme.

As part of the campaign the grocer is encouraging consumers to #rethinkgrocery as a way to further promote its lower prices. Additional pieces of work can be seen here and here.

“When you get a chance to work with a brand as fearless and competitive as LIDL, you have to deliver work the category won’t see coming,” said David Muhlenfeld, vice president, creative director for The Martin Agency. “So we went semi-ballistic and took a cheerful hammer to fruit pyramids and all the other tricks traditional groceries use to make you pay more than you should.” 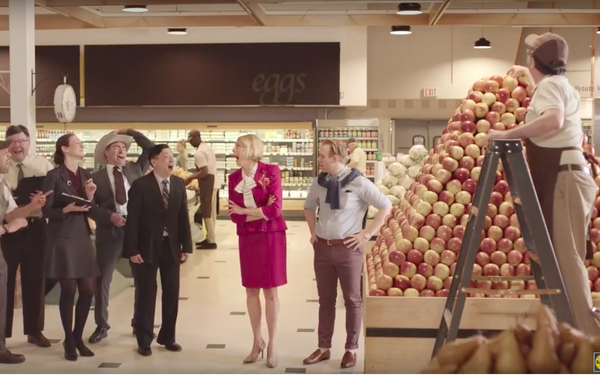