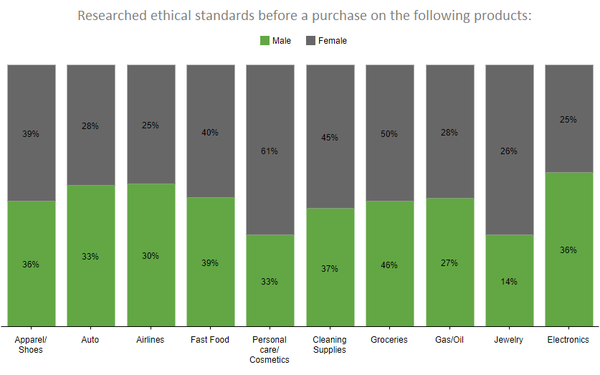 There has been no shortage of scandals and attendant negative press surrounding major corporations within the past year. However, despite the number of companies that have come under fire, a recent survey finds that only 28% of U.S. adults have stopped using a brand because of something negative they learned about in the news. The results suggest that regaining all of those customers isn’t easy.

Among that 28%, the brands that suffered the most were: Wells Fargo, Target, Papa John’s, Uber, FedEx, Nike, Walmart, the NFL and Chick-Fil-A. Millennials were the most likely to abandon a brand due to bad practices or press, while only 21% of those ages 65+ report doing so.

The majority of respondents have never researched the ethical standards of a company before making a purchase. Of the 35% who have, the product categories they were most likely to research were:  groceries (48%), personal care/cosmetics (46%), and household goods (41%).

Among the consumers who changed their behavior due to negative press, only 30% report that a company had been able to win their business back. Brands that saw the greatest level of forgiveness among survey respondents were: Wells Fargo, Walmart, Uber, Nike, and the NFL. Forty-one percent of those between the ages of 25 and 34 say that a company was able to win them back, making them the most-forgiving age group.

Disgruntled customers respond the most to actionable efforts made by the company in question. Fully one-third were influenced by company changes that clearly addressed their sentiments. Tied for second were sincere statements made by the company to address their customers and creating a better system for receiving and responding to customer feedback (both at 23%). Online ambassadors for a company had the least effect, with only 8% citing them as a factor for giving a brand another chance.

1 comment about "Spotlight On CSR: Millennials More Prone To Punish Brands For Scandals".
Check to receive email when comments are posted.
Next story loading