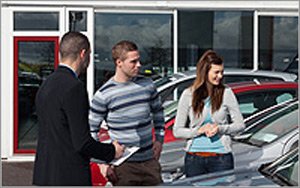 Cox Automotive is releasing its annual report on car buying behavior on Wednesday, and there’s nothing in it that should shock any of the automakers, who continue to struggle to change their dealership experiences.

Here’s the deal to anyone not privy to the inner workings of the auto world: There has been a struggle between automakers and dealers since the beginning of time. I suspect if Fred Flintstone were an auto dealer, he would have had trust issues and power struggles with Footmobile Motor Co. You can actually have one of those Footmobiles updated with an engine, per Reuters, but I digress.

The seventh annual 2018 Cox Automotive Car Buyer Journey, commissioned by Cox Automotive through IHS Markit and based on a survey of more than 2,000 recent car buyers, revealed car buyers spend 60% of their shopping time online, and more than three-quarters (78%) of car buyers use third-party sites, like Autotrader and Kelley Blue Book.

Shoppers are spending less time in-market for a car. The biggest decrease is among used car buyers, as two in three state they need, rather than want, a new vehicle.

While it’s clear the time to influence and convert car shoppers begins online, the in-store dealership experience continues to be a sore spot with buyers. According to the study, the typical car buyer in the U.S. spends more than three hours in the dealership from start to finish. For half of new car buyers in America, that’s entirely too long.

Buyers noted they spend nearly 40 minutes idle while at the dealership, which has the potential to lead to frustration in finalizing the sale as some buyers start to rethink the deal. Additionally, the majority of shoppers (64%) noted the financing and paperwork took longer than they expected. The test-driving process and interaction with sales people were the most satisfying parts of the journey at 77% and 73%, respectively.

“While this study reaffirms the directive that dealers need to reach consumers online as early as possible in their car buying journey, they should not overlook the need to enhance their in-store experience, which ultimately impacts the final purchase decision,” said Isabelle Helms, vice president of research and market intelligence at Cox Automotive.

Cox is offering a way to help dealers optimize their online presence via its new Accelerate connected retail solution, which works across Autotrader, Dealer.com and Kelley Blue Book. It’s aimed at driving operational efficiencies while improving the overall customer experience.

The Lincoln Motor Co. is one automaker acutely aware of the annoyance that car buyers have with the lengthy amount of time that they must spend at dealerships during the purchase process.

The automaker continues to tweak its “Lincoln Way” pilot program designed to make the sales and ownership experiences more effortless. Currently in a pilot via 10 dealers nationwide, the service includes test drives and sales completion at customer homes. After purchase, it continues with pickup and delivery for maintenance services. It includes an app which enables customers to see where their vehicle is at in the process.

Seventy-five dealers have applied to be in the program as it expands, and the automaker is currently reviewing those apps, Robert Parker, Lincoln’s director of marketing, sales and service, told me at the Los Angeles auto show.

Clearly, more automakers need to follow Lincoln’s lead if they want to attract and retain customers. Understandably, dealers worry that if you move sales away from the dealership, the next step is getting rid of dealerships altogether. But there will always be a need for sales people; it might just look a lot different than it did at Footmobile Motor Co.