Hardee's Rewards Fan Who Wrote His Novels At The QSR 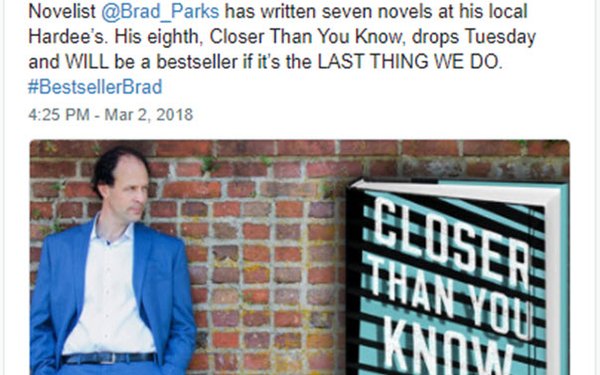 Hardee’s has gone all out to honor one of its biggest fans.

After a newspaper in Staunton, Va., revealed that crime novelist Brad Parks had written eight books, over a decade, while sitting in Hardee’s restaurants, the QSR brand went to work.

The fast-food brand ran a full-page ad in the newspaper, The  News Leader, telling the story and congratulating Parks on the release of his eighth novel, More Than You Know, on March 6.

Hardee’s also created special business cards identifying Parks as its “Resident Novelist,” and a plaque being used to dedicate the booth in the Staunton Hardee’s where Parks wrote the latest book. (He wrote the previous seven in a Hardee’s in Middlesex, Virginia, where he and his family lived until 2016.)

And — in a gesture that would no doubt be appreciated by nearly any author — the fast-food brand began promoting his new novel on its Twitter channel (one post shown), vowing to help make it a bestseller.

But Parks seems equally tickled that, after 10 years, Hardee’s is following him on Twitter. “I feel like I’ve won a Lifetime Achievement Award,” he tweeted (a sentiment now immortalized on his plaque).

“We love hearing about customers doing extraordinary things,” and “we knew right away we had to do something special for him,” said a spokesperson for Hardee’s parent company CKE.

Why try to write in a fast food restaurant? Turns out that Parks found it a convenient place to get away from the distractions of a young family and the internet (he doesn’t have an online connection while he’s working). Parks also observes fellow customers and imagines some of them into characters in his books, he told the The News Leader.