'Seventeen' Transports Teen Activists To March For Our Lives 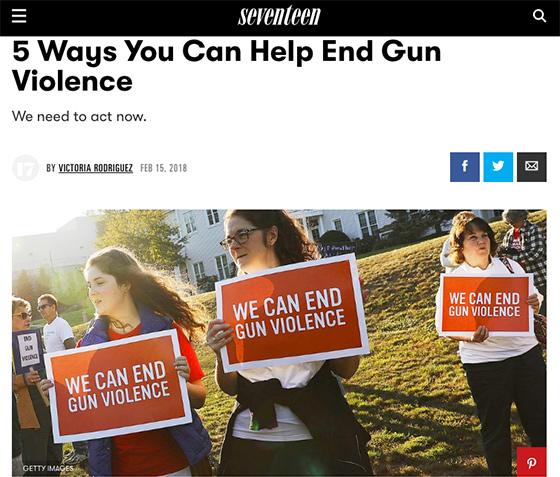 Over the past few years, magazines traditionally geared toward teen girls and young adult women have transformed into platforms for political and cultural activism.

Last year, Cosmopolitan ran a feature package advising its readers on how to run for office. Teen Vogue, now a digital-only entity that continues to expand its brand in new and surprising ways, has built a network of young activists across the country through its popular Summit.

This Saturday, Seventeen continues to spread empowerment as it transports 30 New York City teen activists to the March for Our Lives in D.C.  Without the magazine's help, they would be unable to attend.

“Seventeen connects with and speaks to teens every day across print and digital platforms,” Seventeen executive editor Joey Bartolomeo tells Publishing Insider. “One of our biggest missions is to support our readers as they use their voices to make change in the world. This bus is a physical extension of that. We’re giving them an opportunity to participate in a movement that affects their lives, and also creating an activist alliance for girls who want to make a difference.”

The teens hail from across the city, each belonging to one of three organizations: Girl Up, New Yorkers Against Gun Violence and IGNITE.

Grace Goldstein, a 16-year-old student at Stuyvesant High School, joins. She was involved in last October’s Tribeca terrorist attack, and has since created a group at her school called Stuy Says Enough, dedicated to ending gun violence. She also helped to organize a walkout at the school last week.

Since the shootings at Marjory Stoneman Douglas High School in Parkland, Florida, last month, Seventeen has covered the aftermath across many platforms. Stories from survivors were featured on a special Snapchat Discover edition that reads like an oral history of that horrifying day.

Olivia Worthington, a 17-year-old survivor of the event, talks to Andrea Stanley. Worthington lived next door to the shooter for nearly six years, and she recalls the events of the day, including the confusion and terror as the students streamed out of the school. She bruising her legs as she hopped over the school’s fence to escape, making sure each of her friends got a ride home because “there was no time to panic.”

“As a brand for teens, we’re committed to shining a light on their unique stories and perspectives on ending gun violence,” says Seventeen digital director Kristin Koch. “We’re also giving them practical tools and information across platforms, like step-by-step tips on how they can call their representatives to demand action on Instagram Stories, and statistics on how gun violence has affected teens across the country on Snapchat Discover.”