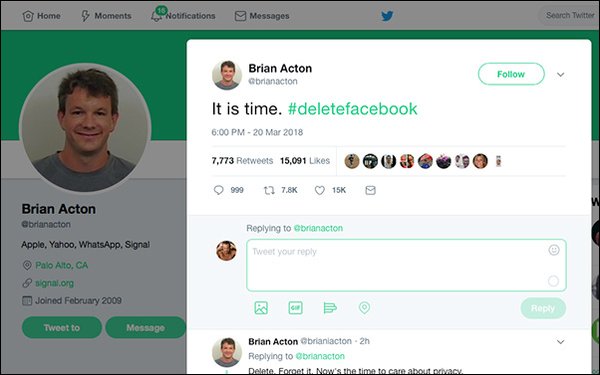 Convinced that Facebook has betrayed the trust of its users, WhatsApp cofounder Brian Acton is telling the world to delete the social app from their devices.

“It is time,” Acton tweeted on Tuesday. “#deletefacebook”

While Acton has long advocated for user privacy, his call to action is still remarkable in light of the fact that he sold  WhatsApp to Facebook for $19 billion in 2014.

Acton walked away from WhatsApp earlier this year, while his fellow cofounder Jan Koum continues to run the mobile messaging service.

“It’s not surprising given that Acton joined Signal after leaving Facebook,” said Jeff Pollard, an analyst at Forrester Research.

“He went from one of the world’s largest surveillance economy platforms in Facebook to building out a foundation designed to ensure private encrypted communications between parties,” Pollard said. “That path clearly indicates his opinion on privacy and data commercialization.”

Acton is not the first of Facebook’s ex-employees to publically decry the company.

Last year, Chamath Palihapitiya, Facebook’s one-time head of growth, told The Verge that the company was “ripping apart the social fabric of how society works.”

Sean Parker, Facebook’s founding president, also recently took a jab at the social giant. As he told Axios in November: “The thought process that went into building these applications, Facebook being the first of them … was all about: ‘How do we consume as much of your time and conscious attention as possible?’”

Of course, those statements were made before the world learned of Facebook’s failure to stop Cambridge Analytica from weaponizing user data in the run up to the 2016 U.S. presidential election and the Brexit Leave campaign in the UK.

In response, the company’s stock price has tanked, while U.S. lawmakers are calling for further investigations into Facebook’s business practices. Even The Federal Trade Commission plans to investigate the matter, and, specifically, whether Facebook violated a 2012 consent decree.

Still, some analysts doubt whether any amount of criticism can convince users to delete their Facebook accounts.

“In this case, Facebook’s network effect does help protect it,” Pollard reasoned. “For some people, the only way they stay in touch is via Facebook.”

Added Pollard: “As long as their friends or family use it, they will too. The Facebook users whose privacy was violated, are the very reason it will stay alive … only to continue violating users privacy in the name of maximizing profit.”