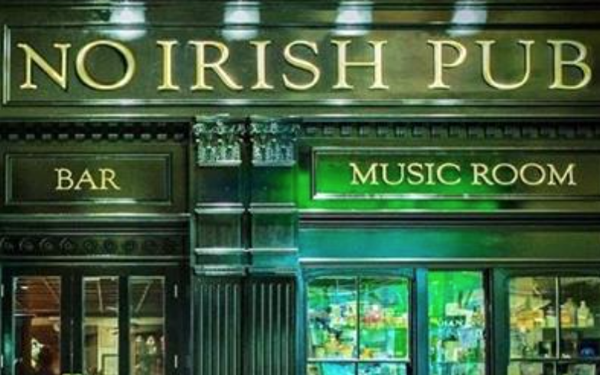 While dozens of brands aimed to cash in on St. Patrick’s Day merriment, a Detroit-area ad agency executive conducted a provocative experiment with the aim of simply getting people to think.

Dan Margulis opened the “No Irish Pub” for one day during Detroit’s huge St. Patrick’s parade and celebrations a week before the actual holiday. It treated the Irish like America used to treat Irish immigrants.

Local contractor Bill Johns, posing as a bouncer, gave voice to America’s “No Irish Need Apply” legacy, and refused entry to people of Irish heritage or anyone wearing green, who were claiming Irish ancestry for the day. He vocally criticized the Irish and provoked those walking by. People were handed a pamphlet after they had walked a short distance away from the bar explaining the project and social experiment.

A 2-minute video directed by Chris Chynoweth and produced by Atlas Industries documents the experience and includes the many outraged reactions. The thought was the very folks who might have such a huge reaction to this “prejudice” might be the same people having fits about immigrants currently in the U.S., Margulis says.

The video was released on St. Patrick’s Day and quickly went viral on social media. A website, noirishpub.com, also features the video and background on the project.

The experiment, which essentially was performance art, was designed to “shock people into empathy by having them experience the same discrimination suffered by many of their ancestors,” Margulis says. The effort got people to react viscerally, not habitually, he adds.

“I wanted to find a way to personally invest white folks into the divisive immigration conversation,” he tells Marketing Daily. “The goal was to shock people into empathy, and to refocus the debate from 'legal status' to 'human story.’”

Marguilis, most recently a group creative director at MDC agency Doner, conducted the project on his own time and with his own resources. The agency was not involved and it is not attached to any brands.

The story has been covered by NPR, Telemundo, Newsweek,The Drum, Complex, Univision, ABC, NBC, Fox, USA Today, MSN, The Detroit Free Press, The Irish Central, and local TV stations and news sites from Detroit to Texas, L.A. to the UK.

Margulis hasn't decided what’s next for the project. It has been suggested that he take the activation around to other communities, but he’s not sure it would resonate if not conducted around the St  Patrick’s Day festivities. But he’d like to continue raising awareness.

“So many xenophobic and anti-DACA folks claim Irish heritage on St. Pat's without understanding A) the first wave of Irish came before America had immigration laws and B), we considered them dangerous scum from a shithole country,” he says. “Back then, Catholics were considered a threat to America the way Muslims are today. We hoped to get people to see that and realize their family origin story isn't much different than the Dreamers or even the illegals who sacrificed everything to get here.”