Phenomenal 'Roseanne' Is The Talk Of TV This Week 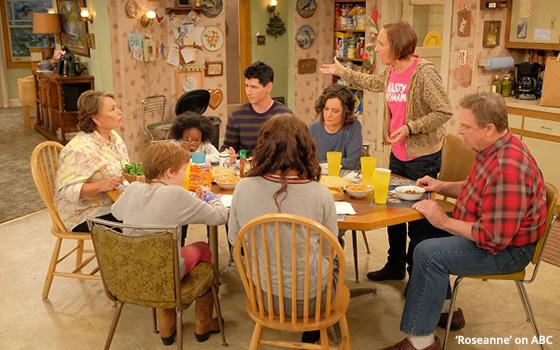 Although I previewed the first two episodes of the new “Roseanne” before they aired Tuesday night, I watched them again on ABC and they were even better the second time around.

Incredibly, on Wednesday as I prepared to write this column, I encountered myriad reviews by so-called TV critics who actually panned the show.

They have every right to their opinions, of course, in much the same way that anyone has the right to be an idiot or otherwise make a fool of him- or herself in public.

Watching these “Roseanne” episodes, I was struck -- and not for the first time -- by the awesome talent that some TV productions are capable of assembling.

On the new “Roseanne,” these include John Goodman and Laurie Metcalf, both celebrated actors and multiple-award nominees who we TV viewers get to watch for free on network television.

Consulting producers on the show included top comedians too -- Whitney Cummings, Wanda Sykes and Norm Macdonald, to name just three of them.

Some critics actually complained that the Roseanne Conner character (and probably her husband, Dan, played by Goodman) were depicted as Trump supporters who voted for him in the 2016 presidential election. As it happens, Roseanne Barr herself voted for Trump.

The critics who griped about the Conners' political point of view seemed to take it personally. At least one critic I read on Wednesday indicated that in allowing her character on TV to adopt this point of view, Roseanne Barr had somehow let him down -- and all the fellow members of his generation. He then complained vaguely (and without merit) about baby boomers.

I guess some people do not recognize a TV comedy about a fictional family when they see one. Besides, Roseanne Conner's pro-Trump election stance served a clear purpose on the show. Given the tenor of the times, it was courageous too.

On the revived “Roseanne,” her pro-Trump stance put Roseanne at odds with her sister, Jackie (Metcalf), who supported Hillary Clinton and hysterically spewed hatred at anyone who did not.

The scene in the premiere episode in which the two reconciled was one of the finest scenes you will likely see on TV this year.

The divisions in the Conner family over the election of Donald Trump felt accurate.

You might even have assumed the pro-Trump and pro-Clinton camps would be portrayed in a fair and balanced way. However, they did not play that way. In most of the encounters over this issue, the Roseanne character remained cool, calm and collected, while Jackie the Hillary supporter seemed unhinged.

The political debate in the Conner household positioned the 2018 version of the family (seen in the photo above) as thoroughly modern.

Among the newest members are two grandchildren -- one an African-American girl who is the daughter of D.J. (Michael Fishman) and a young son of Darlene (Sara Gilbert) who looks to be about nine or 10 years old and prefers wearing girls' clothes to school.

Far from being intolerant of their grandchildren, Dan and Roseanne are full of love for them, and they naturally worry about the boy and whether he will be bullied at school. On the show, the issue was handled with sensitivity.

The critics who panned this show do not know a quality TV show when they see one. Or at the very least, they do not seem to appreciate a genuine phenomenon when it is staring them right in the face.

How phenomenal was the new “Roseanne”? Well, in addition to all of its creative qualities that would be enough to earn it a four-star review from anyone with half a brain, the show scored with audiences.

The two new back-to-back episodes of “Roseanne” that aired from 8 p.m. to 9 p.m. Tuesday on ABC drew 18.2 million viewers, according to the overnights -- and a whopping 5.1 rating in adults 18-49. These numbers are almost unheard-of today.

Moreover, ABC said the audience increased in the second half-hour, which likely means the show's premiere was no flash in the pan. Millions will be back for more next week.

Score one for the baby boomers.

tv
3 comments about "Phenomenal 'Roseanne' Is The Talk Of TV This Week".
Check to receive email when comments are posted.
Read more comments >
Next story loading