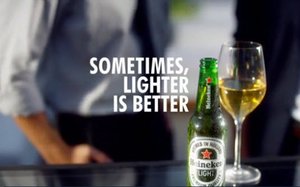 Heineken has pulled an ad for its Heineken Light after Chance the Rapper charged, in a tweet, that the ad, taglined “Sometimes Lighter Is Better,” was “terribly racist.”

The ad, named “Rooftop,” is part of Heinken Light’s new campaign, taglined “Sometimes Lighter Is Better.” It shows a bartender noticing a woman about to drink a glass of wine, and shooting a bottle of Heineken Light down a long bar to her. The bottle bypasses several darker-skinned customers along the way.

The Sunday evening tweet from the rapper, who has more than 7 million Twitter followers, quickly generated controversy on social media, though not all agreed that the spot was meant to be racist.

Heineken USA issued a statement within hours: "For decades, Heineken has developed diverse marketing that shows there's more that unites us than divides us. While we feel the ad is referencing our Heineken Light beer — we missed the mark, are taking the feedback to heart and will use this to influence future campaigns."

Chance the Rapper later made it clear that he was not calling for a boycott.

However, the growing controversy was reflected in a petition on Care2 aimed at Heineken International CEO Jean-Francois van Boxmeer, which had drawn 8,400 supporters as of mid-day today, with a goal of 10,000.

The petition, citing Chance’s observations, maintains that Heineken is “the latest company to jump on the ‘hey-this-will-get-people-talking-because-its-racist’ bandwagon.” It urges consumers to “ask Heineken to take down this ad and apologize for making light of a very dark part of our culture.”

By late Monday, Heineken had pulled the ad from TV and the internet, without further comment.

Heineken is also running other ads as part of the new “Sometimes Lighter Is Better” campaign — “Indoor Bar” and “Sport” — but those don’t show darker-skinned people being bypassed by the beer shooting down the bar. The campaign is meant to position Heineken Light as an alternative to wine and cocktails — a beer with lower calories and alcohol content, but "great taste."

Heineken won praise — and a Cannes Lions award — for its “Worlds Apart #OpenYourWorld” campaign, launched last year, showing people of differing backgrounds and viewpoints learning to listen to and accept one another, over Heineken beers.

Other recent ads that have generated controversy based on charges of racial insensitivity or racism have included H&M’s U.K. ad featuring a black boy modeling a sweatshirt bearing the words “coolest monkey in the jungle”; a short Dove video showing a black woman transforming into a white woman; and a Kellogg’s Corn Pops ad with artwork that showed the sole brown Corn Pop depicted as a janitor.

beer, beverages
1 comment about "Heineken Pulls One Campaign Ad After Racism Accusations".
Check to receive email when comments are posted.
Next story loading