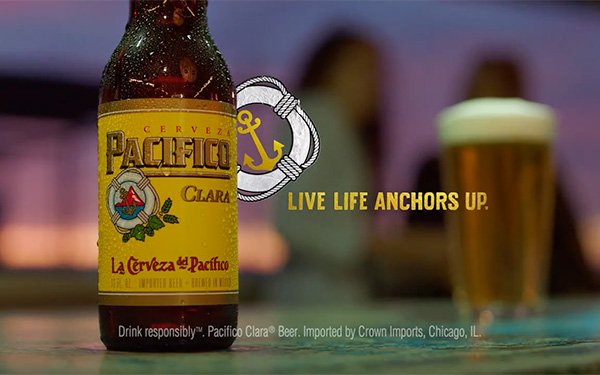 Developed with Cramer-Krasselt, the “Live Life Anchors Up” creative is inspired by the anchor on the bottle. Young Millennial men — the campaign's target — are seen in short snippets enjoying beach lifestyles and adventures with a voiceover stating, "The world is full of anchors meant to keep you in place, but the good news is that it’s also full of things that remind you not to let them. So, every time you raise a Pacifico, let it be a reminder to live life anchors up."

The media strategy will balance "high-reach networks" that provide mass audiences such as ESPN with more unique placements that align with the targeted Millennial’s passion point of adventure and discovery, such as the Discovery Channel. "And for those markets that have already received TV, our weekly weight levels will be three times higher than this past year, resulting in a truly impactful advertising plan," says an agency spokesperson.

There will also be signage and activations at live events including the Burton US Open of Snowboarding, X Games summer sponsorship, and an Airstream activation partnership.

And, a digital/social influencer campaign will launch this summer.

“Pacifico has always been a beer for those with an independent spirit. It’s in the brand’s DNA,” says Rick Hamann, executive creative director, Cramer-Krasselt. “We were charged with bringing this to life in a way that inspired people to follow their own compass."

Constellation hopes to expand this brand beyond its core surfer and outdoor fanbase to reach Millennials across the United States. C-K first started working with Constellation on Pacifico in 2015. The brand’s sales were up 19% in 2017, according to the agency.