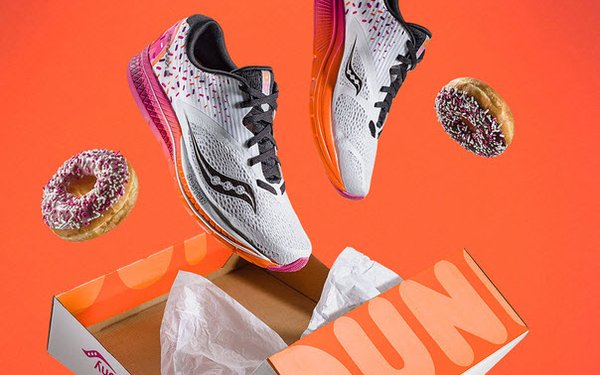 Athletic shoemaker Saucony, which designs a special sneaker each year for the Boston Marathon, has this year partnered with Dunkin’ Donuts to create an homage to the brand that “America runs on.”

The pair-ing (so to speak) is apt in more than one way.

For starters, Bostonians are obsessed with the now-international QSR brand, which was born in Quincy, Mass., in 1950, and now headquartered in Canton, another Boston suburb. Saucony is also headquartered in a Boston burb (Lexington).

And though it may surprise non-runners, Dunkin’ reports that the Strava exercise tracking app has found coffee and donuts to be the #1 and #6 most-cited food/beverage among runners, respectively.

The Saucony X Dunkin’ Kinvara 9 model features Dunkin’s orange-and-magenta color scheme, and images of hot and iced coffee, sprinkles and (on the back of the heels) a frosted donut, along with Dunkin’s logo and “America runs” tagline. Saucony’s logo was adapted to incorporate a coffee-bean motif. The pièce de résistance: The shoes come in a box that closely resembles a Dunkin’ box.

Available in men’s and women’s sizes, the sneakers are now available for pre-order on Saucony.com. The catch: Saucony is making just 2,000 pairs.

Dunkin’ is also observing the Boston Marathon, which will be held on April 16, with a special offer for members of its DD Perks Rewards Program. From April 9 to April 20, Perks members in select New England markets who order through its On-the-Go mobile app will earn double points.