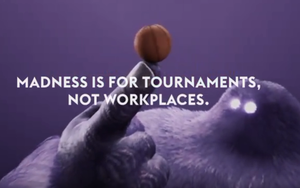 KBS, the MDC Partners agency, has transformed the iconic purple CGI Monster.com beast into what the agency calls a “Vonster” (as in virtual monster) -- a fully interactive puppet that can be animated instantaneously to generate new content in real time. It’s currently spinning basketballs in real time during TV coverage of March Madness.

As with all CGI characters, job platform Monster.com's purple beast mascot was expensive and time-consuming to create and it’s difficult to develop content on the fly.

However, Monster's agency KBS with its partner The Mill, a visual effects and content studio, sought to develop more time-relevant ads using the beast by leveraging  technology to build and execute a real-time content system. Monster.com had previously built the CGI Monster and the added technology transformed the 50-foot mascot into a “puppeteer” to perform multiple moves with the touch of a remote.

This is the first time technology has been applied in this way, to create a fully interactive virtual puppet that could be re-animated live on-set to generate new content instantly, says Mike Abell, group creative director, KBS.

Now, the virtual monster enables the agency to generate new content in real time, with the most recent ad featuring the Monster  spinning basketballs during March Madness.

The Vonster project has also developed more than 30 videos for the client that were targeted, contextual and culturally relevant to specific events and moments, says Abell. For instance, KBS created ads around generic and industry specific job searches, as well as cultural events for New Year's, the Super Bowl, and the Olympics.