Bochco Was A Disrupter Before The Term Was Coined 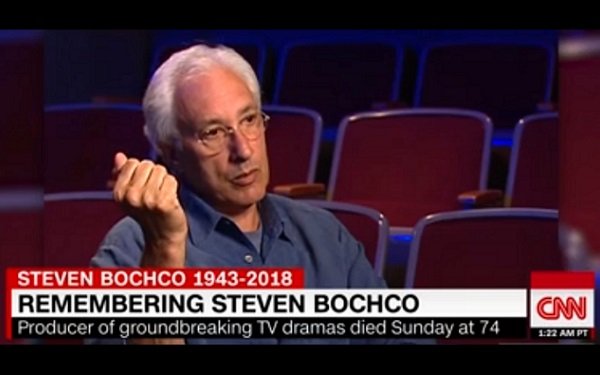 Steven Bochco was not the most prolific of TV's star producers, but he was one of the few whose name everybody knew.

This was likely due in part to the relationships he nurtured with TV columnists and critics. He was an accessible guy who gave great interviews. He was one of the few who did this.

Bochco, who died Sunday at age 74 following a battle with leukemia, is deservedly being remembered as a unique talent and innovator in the pantheon of TV producers.

Pointing out that a number of Bochco’s shows such as “Cop Rock,” “Murder One,” “Bay City Blues,” “Brooklyn South,” “Over There” and others were short-lived is by no means meant to denigrate him.

In so many ways, Steven Bochco was a game-changer -- a disrupter long before the term was coined.

He was a fighter for greater permissiveness in network TV -- an effort that was easy for a TV columnist to criticize because it often came down to a question of whether or not ABC would permit him to show Jimmy Smits’ or Dennis Franz's naked backsides on “NYPD Blue.”

As memorable as “L.A. Law” and “NYPD Blue” were, it was “Hill Street Blues” that became a legend.

Those not fortunate enough to have been around in the “Hill Street Blues” era cannot comprehend the impact -- and more importantly, the addictive and attractive nature of this landmark TV series.

In my own TV history, this is one of only a small handful of shows I ever scheduled my life around. Others who were never prone to caring one way or another about a TV show felt the same way.

What made this show so special? One reason was that it was crowded with characters more numerous than shows that had come before it, which was one of Bochco's chief innovations.

A viewer got to know all of them as well as they knew their own friends and family, and cared about them as much too. One presumes this is attributable to the way Bochco conceived and then ran the show.

At the time, nothing else on TV looked like “Hill Street.” Very few shows in the history of television -- particularly in the 1980s on network TV -- have ever enjoyed that distinction. And of the ones that did, few ever stuck around long.

That may have been the great achievement of “Hill Street” -- it was like nothing else on the air at the time, and succeeded because of it, which is no mean feat in any era.

In the reminiscences and tributes to Bochco that have appeared over the last two days, many columnists and commentators are crediting Bochco with ushering in the era of television that many critics have long described as “golden” -- starting somewhere around the turn of the current century with shows such as “The Sopranos” on HBO.

Some of the columns and blogs on Bochco insist that the Golden Age of the '00s would not have been possible without him.

I tend to discount such sweeping generalizations. The so-called Golden Age had as much, if not more, to do with the whole world of video entertainment fragmenting to such an extent that concerns about naked backsides ceased to have any meaning anymore.

Steven Bochco and the shows he produced had nothing to do with bringing about the technological changes that upended the way content gets distributed.

But that's fine. Making a handful of shows that stood out from the pack is enough of an achievement for any single producer, particularly if one of the shows was “Hill Street Blues.”