News Media Were Different In 1968, But Strife Remains The Same 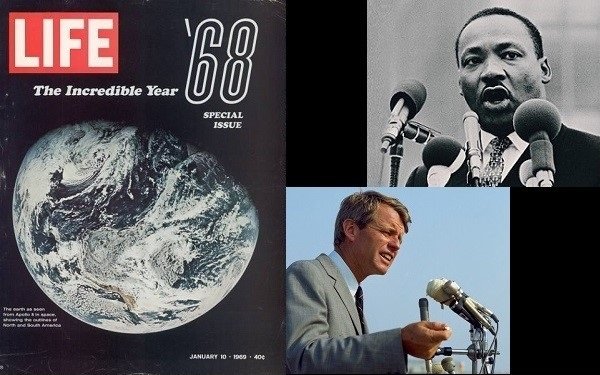 Those of us of a certain age are taking in the remembrances this week of Martin Luther King Jr. and having difficulty comprehending that 50 years have gone by since 1968.

TV in particular has been chock full of documentaries about Dr. King, who was assassinated in Memphis 50 years ago on April 4, 1968.

Among them was Paramount Network's "I am MLK Jr.," which aired Wednesday night (April 4) and was simulcast on BET.

It is one of the consequences of aging. The older we get, the longer our pasts become. One result is that vast portions of the people alive today were not yet born in 1968. Thus, they cannot share with us the experience of having lived through the '60s.

For them, the tumult of that decade is accessible only through TV and movie dramatizations and documentaries, plus books if they care to read them.

For many of us, the decade is refracted through the prism of childhood. I was eight years old when Dr. King was assassinated. I first heard the news while watching "Daniel Boone," which aired then on Thursday nights from 8 p.m. to 9 p.m. on NBC.

The bulletin from NBC News broke abruptly into the show at about 8:10 p.m. Eastern time, delivered in the "we interrupt this program" tradition of the era. An anchorman whose identity is lost to memory (maybe Chet Huntley?) delivered the news: Dr. Martin Luther King Jr. had been assassinated in Memphis.

I ran to the living room to report the news to my parents. Then I asked: Who is Martin Luther King Jr.? An eight-year-old cannot be expected to know everything, although in those days there were no restrictions to media in our household.

It goes without saying that news media then was different than today. It was not instantaneous or ubiquitous. Still, it accomplished what it was supposed to do -- keeping people informed about their world with all the technology that was then available and state-of-the-art.

In our household, the prevalent news media were television and Life magazine. For those of us old enough to have experienced the arrival of Life magazine in our mailboxes every week, the quality and impact of this oversized glossy magazine cannot be overstated.

In 1968, thousands of families still possessed the famous issues of Life published in the wake of President Kennedy's assassination in November 1963. As the '60s wore on, a precocious kid with access to Life could absorb everything that was going on in the world -- the Vietnam War, race riots, fashion innovations, drug culture, you name it.

In my memory, the 1960s were a harrowing time. Whenever I think back on it, the predominant images that come to mind are those of strife. Portions of cities were always burning. Crowds of people were amassing everywhere and shouting at each other. They often came to blows with each other and with police.

The year 1968 was particularly turbulent. Two months after Dr. King’s death, Robert Kennedy was assassinated on June 6 in Los Angeles. Look for a slew of TV documentaries later this spring to commemorate the 50th anniversary of that assassination too.

Two significant political assassinations in a single year, in the space of two months, gave 1968 a flavor all its own. We braced for even more such killings, but they did not happen.

As one who lived through the era and found it alarming and unsettling as a child, I am not one to gravitate toward commemorative TV shows about the 1960s. Younger people should have at them, however.

Maybe the TV documentaries can help them come to the realization that every era has its good and bad points, and that the current one is really no better or worse than all the others.