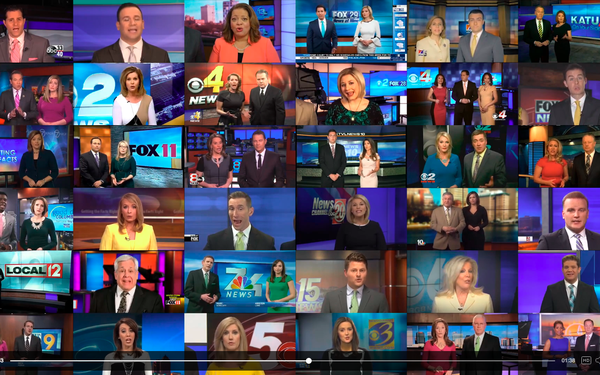 The mandated on-air read of the promo was revealed early last month, first reported by CNN. The promos talked about combating “fake news” and stated that it is "extremely dangerous to democracy."

According to reports, many Sinclair anchors/journalists -- on background -- did not agree with the company's efforts -- promos that were labeled “must-run.”

Sinclair is the largest owner of local TV stations in the United States. It owns or operates 193 outlets in 89 markets.

In the promo, one anchor says: "The sharing of bias and false news has become all too common on social media. More alarming, some of these media outlets publish 'fake news' without checking facts first."

No names of news organizations were mentioned.

The video montage, released by Deadspin, shows many of Sinclair's anchors from across its many stations reading the exact same copy. It shows multiple TV anchors from different markets in video “boxes” saying: "This is extremely dangerous to our democracy."

In a response, Rep. Adam Schiff (D-California) tweeted: "Local news stations now required by Sinclair Broadcasting to parrot the talking points of the President, moving America one step closer to its own version of state run media. And another freedom is assailed under this Administration."

A tweet from President Trump says: "So funny to watch Fake News Networks, among the most dishonest groups of people I have ever dealt with, criticize Sinclair Broadcasting for being biased. Sinclair is far superior to CNN and even more Fake NBC, which is a total joke."

Sinclair's conservative political bent has been a factor when it comes to its proposed acquisition of Tribune Media, still under federal regulatory review.