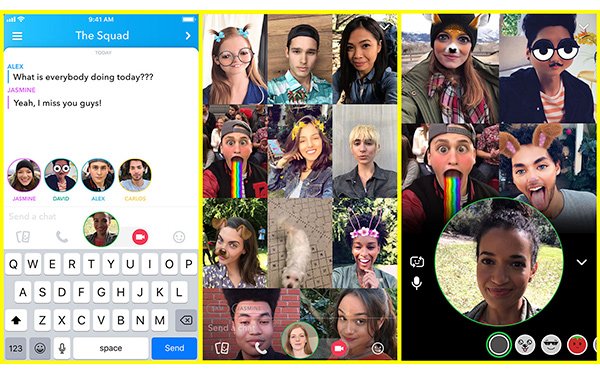 Busy as ever trying to keep young users entertained, Snap just unveiled Chat, a group video chat feature that can host up to 16 people at a time.

Snap is hoping that Chat, built right into its Snapchat app, will encourage users to hang out and pass the time with friends.

When users form a Group Chat, their friends will be notified and invited to join in.

Separately, Snap is also rolling out Mentions with which users can tag friends in their Stories. As with other social networks, typing an “@” and a friend’s username will facilitate the tagging process.

Tagged users should be notified in a chat window, and encouraged to swipe up and add the tagger as a friend, or just view Stories they have publicly posted.

The new offering should be familiar to users of Instagram’s Stories feature, which already boasts a similar tagging tool.

The new Mentions feature has obvious marketing potential as it allows more popular users like celebrities to tag brands, while could encourage their followers to follow a particular brand.

The new features come amid efforts by Snap to tighten up operations and lose less money. In fact, marking its second round of layoffs in the last month, Snap just said goodbye to about 100 advertising and salespeople.

That projection stands in contrast to a recent report in The Information that estimated Snap was on track to lose somewhere between $687 million and $912 million this year, and not make a profit until the next decade.

Unlike Facebook, “Snap is unlikely to be impacted by much because of concerns around the use of data, as data seems to be much less important for Snap than for its larger peers,” Pivotal analyst Brian Wieser writes in a new note to clients.
social media
Next story loading