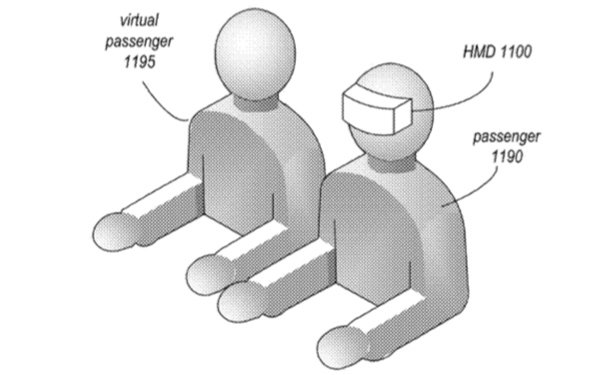 Much of the focus on autonomous or self-driving cars has been about the outside -- as in how to make the vehicles safely navigate their way from one location to another.

While Apple and others have been involved in those aspects, a patent application the company has filed provides a detailed view into what it may be devising for new experiences inside the autonomous car.

The application just published shows Apple creating advanced, in-car virtual and augmented reality experiences -- some solo and others shared by everyone in the car. One example cited is of four passengers each wearing a head-mounted display that projects a view as if the passengers are on a giant hang glider floating above a landscape or a city.

The VR system would be tightly integrated into the actual vehicle electronics and mechanics.

The in-car VR system may also influence how the car is driven. “In some embodiments, the VR system may also generate signals to the vehicle control systems (e.g., to control braking, acceleration, steering or suspension/motion within constraints) and vehicle active systems (e.g., audio and HVAC systems and active seats) to provide physical effects synchronized with the projected virtual content to further enhance the passenger’s experience,” states the patent application.

The VR experience could be for passengers as well as the driver. Part of the reasoning is that drivers may ultimately become passengers. “With the arrival of autonomous vehicles, the driver becomes a passenger, and they may want to occupy themselves while, for example, riding to work,” states the application.

The enhanced VR experiences could be created for passengers in any moving vehicles, including cars, buses, trains, airplanes, helicopters, boats or ships.

Apple also pictures autonomous vehicles that have limited or even no windows, in which case the system could provide augmented or virtual views that help to match visual cues with the motions that a passenger in a moving vehicle is experiencing.

The application has countless potential scenarios and games, all primarily aimed at creating new entertainment and escapism experiences for people who are in cars going from one point to another.

The actual driving of the vehicle is not really part of this equation.