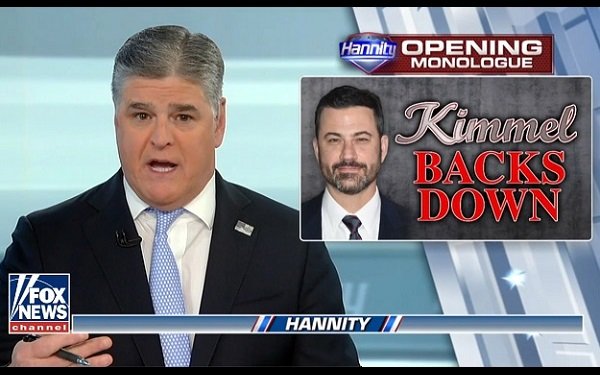 In case you missed it, Jimmy Kimmel and Sean Hannity have been exchanging schoolyard taunts of the kind you might not have heard since you were in fifth grade.

On the other hand, talk-TV today -- on all of the blather shows on the three not-news channels MSNBC, CNN and Fox News Channel -- is like a schoolyard.

If you watch any of them, it is easy to be transported back to some of the worst days of your life. Children can be cruel, and so can TV talk show hosts.

To catch up with this Hannity-Kimmel feud, I spent part of Tuesday looking up some of the video, starting with the most recent one first -- Hannity’s wishy-washy acceptance on his show Monday night of an apology Kimmel issued earlier in the day.

I then went back to see what the two had said before that. Among other things, Hannity last week called Kimmel an “ass clown” and a “despicable disgrace.”

At some point, Kimmel fired back at Hannity on his own show. For some reason, Kimmel chose the tactic of questioning Hannity’s sexual potency. Nyah, nyah!

The feud was ignited about a week ago when Kimmel made fun of Melania Trump’s accent. Kimmel apparently showed some video of her while she was reading a children’s book aloud to a group of kids, possibly around Easter.

When he learned of this, Hannity went ballistic and attacked Kimmel on his Fox News Channel show. Hannity objected to Kimmel including the First Lady in his attacks on the president. Hannity feels attacking the president’s family members, who are not technically part of the political process, should be off limits.

Yada yada yada, time goes on, the weekend comes, and on Monday, Kimmel issues an apology. It is a long statement that among other things, apologizes for offending “members of the gay community.”

In his apology, Kimmel said he wished to dial down the “level of vitriol,” which, if sincere, would be unprecedented for him. “While I admit I did have fun with our back and forth, after some thought, I realize that the level of vitriol from all sides (mine and me included) does nothing good for anyone and, in fact, is harmful to our country.”

This concept strikes me as debatable. This is just a hunch, but I have a feeling the country can survive a feud between Sean Hannity and Jimmy Kimmel -- whose total audiences probably add up to less than 5 percent of the U.S. population.

“Even in 2018, the vile attacks against my wife and wishes for death on my infant son are shocking and I encourage those who made them to give their words and actions thought,” Kimmel said, wandering off-point.

“I, too, will give my words more thought and recognize my role in inciting their hatefulness,” he vowed. “By lampooning Sean Hannity’s deference to the President, I most certainly did not intend to belittle or upset members of the gay community and to those who took offense, I apologize.

“I will take Sean Hannity at his word that he was genuinely offended by what I believed and still believe to be a harmless and silly aside referencing our First Lady’s accent,” wrote Kimmel (or possibly someone else).

“Mrs. Trump almost certainly has enough to worry about without being used as a prop to increase TV ratings. I am hopeful that Sean Hannity will learn from this too and continue his newly-found advocacy for women, immigrants and First Ladies and that he will triumph in his heroic battle against sexual harassment and perversion.”

On “Hannity” on Monday night, Hannity opened the show with a monologue in which he accepted Kimmel’s apology. Given the tone of the final sentences of Kimmel’s apology -- which read like they are sarcastic -- Hannity’s acceptance might be construed as magnanimous.

At the same time, however, he threatened that if Kimmel abuses the First Lady again, the gloves will be off. He also invited Kimmel to come on his show. Whether Kimmel accepts or declines this invitation, it would be nice if he would at least RSVP.