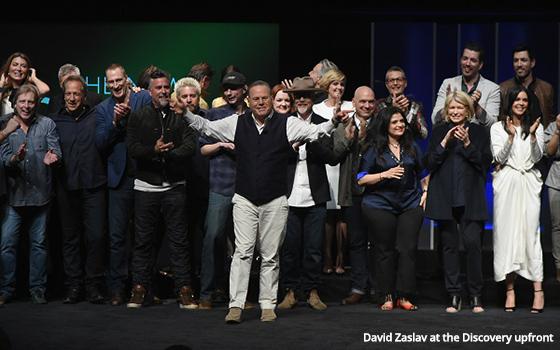 A crowd of unscripted reality TV stars all assembled on one stage was as good a way as any for Discovery Networks to reintroduce itself to the New York advertising community.

At its annual upfront presentation this week in New York, the mission for the company now officially called Discovery Inc. was to reposition itself following the merger with Scripps Interactive, a deal valued at $14.6 billion that closed only last month (on March 6).

The deal meant that the new company would control almost twice as many cable networks (“brands,” as they call them) as each of them owned before.

The end result is a company that is unabashedly bullish on unscripted programming, with no plans to produce scripted content of any kind.

That was the overriding message the company delivered at its first upfront presentation since the merger. The presentation, which took a little over a month to put together (for which all involved are to be commended), was held at Alice Tully Hall at Lincoln Center Tuesday in New York.

Among the great efforts that had to be made -- in addition to writing all the words and producing the visuals on display during the event -- was the wrangling of Discovery and Scripps talent from all over the country (if not the globe) so they could all gather in one place in New York for an onstage spectacle that would serve as a grand finale to the presentation.

That's many of them in the photo above with Discovery CEO David Zaslav triumphantly presenting all of them to the upfront audience in the Alice Tully Hall auditorium. There were more than are shown here, but they would not fit in our available photo space.

It was quite a collection of personalities -- chefs and food experts, home flippers, renovators and designers, sellers of bridal dresses, builders of custom cars and motorcycles, various crab-boat captains and many, many more.

The message that the merger of Discovery and Scripps would result in the world’s most prolific producer and owner of unscripted content (for both television and all-device streaming) was delivered by Zaslav and then reinforced by Jon Steinlauf, chief U.S. advertising sales officer for the new Discovery Inc.

In their remarks promoting their new company's focus on unscripted content, the two repeatedly asserted that commercials within content such as their company owns and produces are simply more widely seen than commercials in scripted television.

“We're a different kind of media company,” Zaslav said in his opening remarks. “Most of the industry today is on one side -- scripted series and scripted movies. It's filled with fantastic companies -- Amazon, Netflix, CBS, 21st Century [Fox]. They're great companies creating great content, but it’s a very crowded space.

“It’s expensive and super-competitive,” he continued. “Four years ago, there were 200 scripted series. This year, there will be over 500. And there are $20 billion being spent by players in scripted that hardly existed three or four years ago -- over $5 million an hour and huge marketing costs because they’re selling shows and subscription brands. Everyone's DVR is full of scripted series and many of them don't have advertising.

“That's not what we do,” Zaslav said. “We don't do red carpet. We don’t do Hollywood stars. We pretty much don’t have actors. We have authentic talent. We focus on strong brands, passionate audiences and real-life entertainment.”

Steinlauf took up the same theme. “Consumers are watching more video content than ever before,” he said. “They stream, they binge, they time-shift, they L-7 and L-35. While TV remains the most powerful marketing and branding tool in all of media, it’s harder than ever for you to reach your audience live.

“For instance,” he said, repeating a point previously made by Zaslav, “there are about 500 scripted TV series currently in production. Nearly half are airing on streaming services and pay cable channels -- great shows, but not an ad to be had.

“In ad-supported TV, dramas and comedies are the most time-shifted genres and we all know that there’s a shortage of live rating points in shows like these,” Steinlauf continued.

“So this may be the era of peak TV, but in scripted, it’s certainly not the era of peak ad-viewing. Bottom line,” he said, “there are two worlds -- one where it’s difficult to get your ad seen and another where it’s not. Discovery and Scripps are two companies with both feet firmly planted in the right world. That was one of the driving motivations behind this merger.”