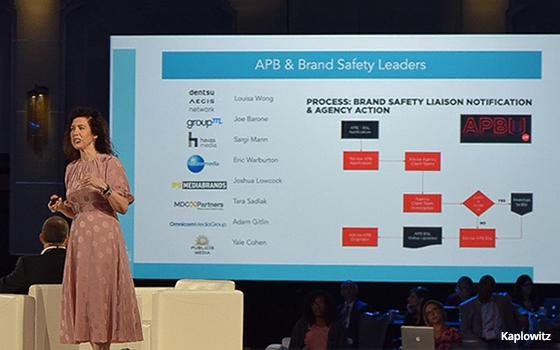 The 4As has announced that its agency partners are forming the Advertiser Protection Bureau (APB) to share the collective responsibility of achieving "Advertising Assurance," which is how the association defines its efforts to enforce environments where brands and consumers can coexist with trust.

Each holding company — as well as Horizon Media — has committed to dedicating a brand safety leader within their network to serve on the bureau.

“There has been a lot of discussion around brand safety," says Marla Kaplowitz, president/CEO, 4As. What’s unique about Advertising Assurance is that it evolves that discussion to a more holistic view of what our responsibility is to consumers, brands and each other.  Advertising assurance can’t happen if we’re not communicating with each other and working together.”

Under APB, agency groups will work together for the good of all the brands they serve by notifying each other when they see any brand ads — whether from their network or not — in unsafe environments. It establishes a process in which risky environments are flagged by the APB and then investigated by agency-client teams.

Looking forward, the APB will work with advertisers to develop categorizations of risk across a spectrum — from "most safe to least safe." This guideline will then allow agencies, advertisers and publishers/platforms to better delineate each advertiser’s appetite for risk and appropriateness.

In an attempt to educate the ecosystem, the APB will develop an industry playbook to include new standards, metrics, methodologies and tools to combat unsafe environments for both brands and consumers.

"Of course, this isn’t just an agency conversation; our industry has to have active participation from brands and publishers to be successful in improving the litany of issues around this topic," says Louis Jones, EVP, media & data, 4As.