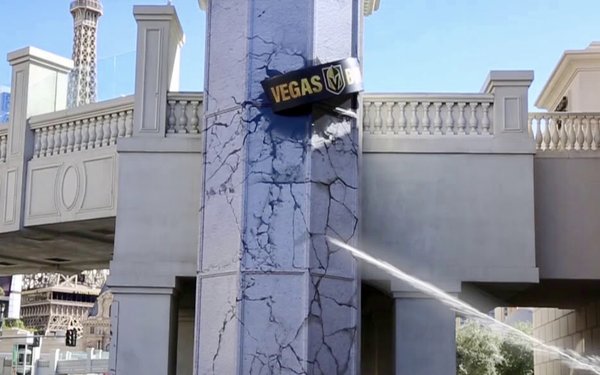 Outdoor advertiser Kre8 is launching its new ad space on six Touchdown Towers, located in one of the busiest intersections in Las Vegas, with a media buy from the Vegas Golden Knights (VGK), the first National Hockey League team since 1979 to clinch a playoff position during its inaugural season.

The Touchdown Towers face the exterior wall of the Strip’s pedestrian bridge elevator columns on Flamingo Road and Las Vegas Boulevard. Through an exclusive agreement with Caesars Entertainment, Kre8 is the sole provider of these select ad plots that host 60,000 vehicles and 424,000 walking hours per day.

“These six towers are currently the only existing option of their kind available on the Las Vegas Strip, making this ad corridor an extremely valuable asset to advertisers,” says Jeremie Watkins, managing partner of Kre8 Media.

To debut the ad space, Kre8 worked directly with VGK's CMO Brian Killingsworth to develop a custom build-out concept that uses a hockey puck to pop out of the wall by constructing the physical pieces and applying the build to the space itself.

The result is an ad that shows a VGK player smashing a puck into the infrastructure of the city.

Although the spot was bought before VGK clinched its playoff spot, team officials started with the idea there was a strong possibility the clinch would be secured, says Ivan Flores Merino, chief brand officer, Kre8 Media Outdoor.

The creative is currently set to run through April 21, although the team will continue to extend the buy if it continues its run through the playoffs.