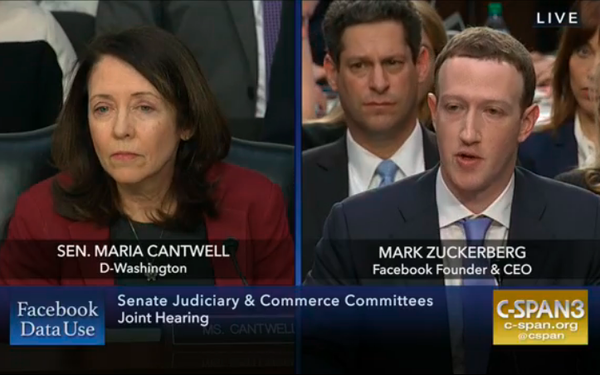 For me, there were two important takeaways from Mark Zuckerberg’s testimony before Congress on Tuesday.

One was that it put not just Facebook under the microscope for its business model and practices in collecting people’s data in oder to target and influence them, but the entire industry.

The other is that it reminded us that once those models and methods become commercially available, it isn’t just benign commercial interests that figure out how to leverage them.

I’ll come back to the first point, but the second one was highlighted by Senator Maria Cantwell’s questioning, especially when she queried Facebook chief Mark Zuckerberg about his familiarity with other potentially nefarious platforms and operators that were precursors to Cambridge Analytica.

Cantwell: "Do you know who Palantir is?"

Cantwell: "Some people have referred to them as a ‘Stanford Analytica.’ Do you agree?"

Zuckerberg: "Senator, I have not heard that."

Cantwell: "Do you think Palantir taught -- as some press reports are saying -- Cambridge Analytica how to do these tactics?"

Cantwell: "Do you think that Palentir has ever scraped data from Facebook?"

Zuckerberg: "Senator, I’m not aware of that."

Cantwell, of course, was referring to Palo Alto-based Palantir Technologies, which was the innovator and poster child for scraping, modeling and segmenting consumer data in order to target and influence people based on data.

I’m not suggesting that Zuckerberg perjured himself in his responses, but I give him props for artfully answering Cantwell, as well as most of the hardballs thrown at him by other Senators Tuesday -- because if there is anyone on the planet who understands that, it’s him.

But it was Zuckerberg’s answer to Cantwell’s next query -- whether Zuckerberg had ever heard of Total Information Awareness, the U.S. government’s own initiative to weaponize Big Data back in 2003 -- that really surprised me, and should remind us all about the connections, interactions and integrations between the technology and data applications developed to help marketers and those developed to help the military and intelligence communities.

There has always been a strong connection, but it wasn’t until the revelations surrounding both Cambridge Analytica’s theft of user data from 87 million Facebook users, its weaponization of it during the Trump campaign, and the big assist from Russia’s Internet Research Agency, that it has ever been made this explicit to the American public.

There undoubtedly are other players neither you nor I -- or maybe even Zuckerberg and the Facebook board -- have not heard of that are operating today, using finely honed methods and technology to up the influence game to the next level.

On Monday, former FBI agent and MSNBC news commentator Clint Watts quipped there is a new cottage industry that could be dubbed as having a “Trolling as a Service” model -- meaning they use sophisticated software, data mining and apply it in a way that trolls people into submission, or at the very least, influences the way they think, feel and behave politically.

This brings me back to my first point, so I just have to ask, what makes this so different from what our industry does in an explicitly commercial way? No, I mean this seriously -- just ask yourself if you replaced the name Cambridge Analytica with Merkle and substituted a consumer product or service brand with a political campaign, what is the fundamental difference in how we are applying technology and data to influence people’s thoughts, feelings and behaviors?

One big difference is that when we do them commercially, we call them “best practices.” When it’s exposed that political operatives -- or even worse, hostile foreign powers -- are doing the same thing, albeit clandestinely, it’s a “breach,” or an “attack” or an “information war.”

It’s more than semantics, because there truly is a fine line separating the ethical use of “weaponized data” in consumer marketing versus political or military influence.

And I don’t think it’s any coincidence that Madison Avenue adopted military terminology to describe what it does best. Think about it: “targeting,” “marketing salvos,” “blockbusters,” even the word “campaign.” Think about it.

We like to think that the value exchange between consumers, the media and brand marketers is a simple and explicit one. But it always has been built on a certain degree of subterfuge and conquest, and advances in technology and data-gathering and application make it even more so, mainly because it’s not explicit and easily understood.

That last part was the gist of the opening questioning to Zuckerberg by Senator Orrin Hatch, which remarkably focused on the fundamentals of marketing’s value exchange. You know, the unwritten agreement with the consumer that there’s no free lunch, or free access to media, even if it’s a social media network. Or as it might seem in hindsight, especially if it’s a social media network.

“Some have professed themselves shocked -- SHOCKED -- that companies like Facebook and Google share user data with advertisers,” Hatch began, adding, “Did any of these individuals stop to ask themselves why Facebook and Google don’t charge for access? Nothing in life is free? Everything involves tradeoffs. If you want something without having to pay money for it, you’re going to have to pay for it in some other way, it seems to me. And that’s what we’re seeing here. And these great websites that don’t charge for access, they extract value in some other way. And there’s nothing wrong with that as long as they are up front in what they are doing. In my mind, the issue here is transparency. It’s consumer choice. Do consumers understand what they’re agreeing to when they access a website or agree to the terms of service? Are websites upfront about how they extract value from users. Do they hide the ball?  Do consumers have the information they need to make an informed choice regarding whether or not to visit a particular website? To my mind, these are questions we should ask or be focusing on.”

And herein lies the inherent contradiction of our industry, and anyone who is trying to understand how it actually works. After pointing out that there is no free lunch, Hatch asked Zuckerberg if he would continue to honor his pledge to keep Facebook as a “free” service.

Hatch: “If so, how do you sustain a business model in which users don’t pay for your service?”