In Stormy We Trust: Credible Witness Or Clever Con Woman? 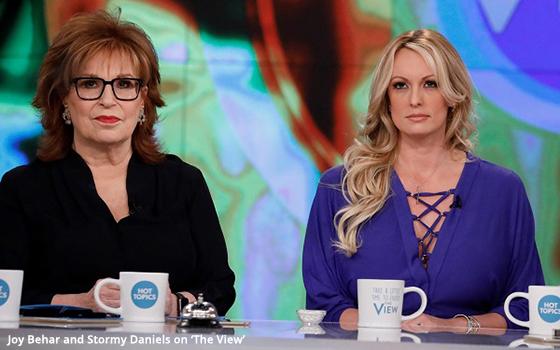 Let's be candid here: There was a time when women whose profession is sex -- either as prostitutes or sex performers (strippers, burlesque dancers and the like) -- were not the kind of people who most other people respected.

For example, you would see this discussed on TV courtroom dramas when lawyers were presented with a decision to put a prostitute, a drug addict or a known felon on the witness stand. The thinking seemed to be that calling such witnesses was a tactic to be avoided if possible.

The lawyers’ assumptions were that jurors or anyone else who would hear their testimony would react with skepticism because of the low reputations and presumed unreliability of such people when challenged to tell the truth.

Well, as Stormy herself pointed out on "The View" on Tuesday, she has no control over the titles of the shows or movies she appears in.

Daniels was asked about it by the "View's" Meghan McCain, who wondered whether Daniels has benefited financially from the publicity she is receiving from her public campaign against President Trump.

McCain was really asking whether publicity, profit and increased ticket sales for her live performances were the prime movers behind Daniels' decision to go public about her affair with Trump.

"Can I say first of all I did not name the tour? You won't hear me say it. I haven't promoted that name. I think it's just awful. I think it's cheesy," said the woman who once starred in "Operation: Desert Stormy" (2007) and "Sexbots: Programmed for Pleasure"(2016).

On the profit question, Daniels admitted that she is making more money these days, but at the same time, she has more expenses. She has her lawyer -- Michael Avenatti, who appeared on "The View" with her -- plus a team of burly bodyguards who, incidentally, she is obligated to feed, she said.

To explain why she has gone public with her Trump affair even under the threat of millions of dollars in potential penalties for doing so, Daniels has adopted some familiar present-day tropes.

The statement was followed by applause from the show’s studio audience who were either (a) enthusiastic or (b) taking a cue from studio’s "applause" sign.

This Stormy Daniels interview was a coup for "The View," a show that rarely makes headlines anymore. In fact, most people do not even know who’s on "The View," other than Behar and Whoopi Goldberg.

Among the most prominent features of the Daniels segments was the unveiling of a police artist's sketch of the man Daniels said accosted her in a parking lot and made vague threats related to her affair with Trump -- a tale she first told to Anderson Cooper on "60 Minutes" last month.

"Absolutely not," answered Stormy. "I think that what I do for a living should not matter. What I do for a job doesn't impact my ability to know right from wrong or to tell the truth!" (Cue applause sign.)

On "The View," Stormy Daniels came across as sympathetic for the most part, perhaps proving that the times they are a-changin'.

They are not a-changin' for Trump, however. On Wednesday, he labeled the artists' sketch seen on "The View" as "a con job."