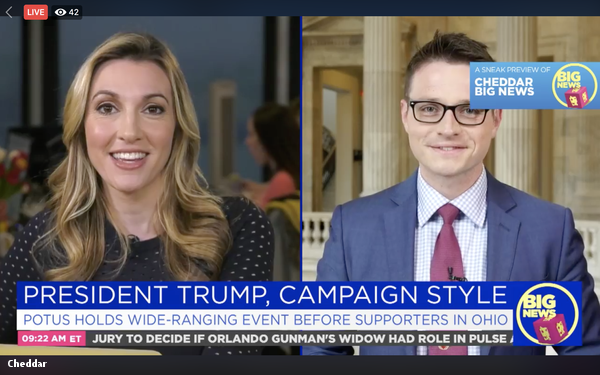 CBN debuted Tuesday on YouTube TV, and will roll out on Sling TV and Philo TV over the next few weeks, with other distributors to follow.

The main Cheddar channel focuses on business and financial news, with some lifestyle programming in the content mix. The new channel will be a general interest news network focusing on top stories and headlines. The network is distributed through over-the-top bundles and services, as well as on Facebook, Twitter and other social platforms.

Coca-Cola is the launch sponsor for CBN, and will be featured in branded segments on the network.

Cheddar is also partnering with third parties to provide coverage a few key areas, including Accuweather to help with weather coverage, and FanSided, Stadium and VSiN for sports coverage.

“We cover the big political stories of the day but don’t torture viewers with circular panels of supposed ‘expert political analysts’,” said Jon Steinberg, Cheddar’s founder and CEO, announcing the launch. “It’s apolitical.....We now have the full suite news offering, with a news network and a business news network.”